The Sydney Motorway Corporation (SMC) is currently in the process of conducting consultation sessions on its Concept Design for the WestCONnex M4-M5 Link. Wendy Bacon went along to the first sessions in Camperdown and Leichhardt, and has provided the following report.

The WestCONnex Stage 3 concept design was released two week ago, nearly four months after it was originally expected. But if you expected the delay was because Sydney Motorway Corporation (SMC) were fine-tuning the detail, you were wrong.

When it arrived, the document was illegible to many people and difficult to download for others (170 mbs). It was the opposite to accessible. Those who could read it, discovered it was very light on detail.

Accessibility if a crucial part of community consultation. So from this perspective alone, the Concept Design consultation process is a massive fail.

A Coalition of twelve groups against WestCONnex wrote to SMC demanding that it be withdrawn. In typical fashion, SMC’s response just batted the objections away, leading to a further letter.

Indeed the Concept Design Document was so bad that even the Administrator of the Inner West Council Richard Pearson slammed the design concept process as “inaccurate, confusing and misleading”

SMC has organised several community feedback sessions on the Concept design. Across a large area stretching from St Peters to Rozelle and Haberfield, there is one three hour evening or Saturday morning session on five occasions. There is no ongoing public display or hard copies available to the public, apart from a single copy in public libraries.

WestCONnex call this “frontloading” the process.

Not long after this Concept design process is finished, SMC will lodge the Environmental Impact Assessment with the NSW Planning Department.

The first session  was held on Thursday evening in the Rydges Motel in Camperdown. Residents who attended were shocked at how little detail was included in the displays and what information there was did not appear to be consistent.

The terms of the consultation are extraordinarily narrow. For example. Residents are asked to comment on the design of pollution stacks that will tower over their communities but not whether they should be filtered or not.

The unexpected news was that after conducting the planning approval process for Stages One and Two after the contract for the project had been awarded, this time the process was reversed. This time, the SMC will submit the EIS before it awards the contract. This sounds better but the only problem is that the route and even perhaps the massive contructions sites will not be finalised in the EIS. Many thousands of residents will not know whether they are on top of the tunnel or now or even whether they will be living near as construction site.

For example, geotechnical drilling and earlier maps showed the M4-M5 route on the Western Side of King Street near Newtown Station. On the concept map, the tunnel crosses King at Alice Street and travels under Newtown Performing Arts High School. WestCONnex staff told residents that they should not conclude from this that the tunnel would follow that route. 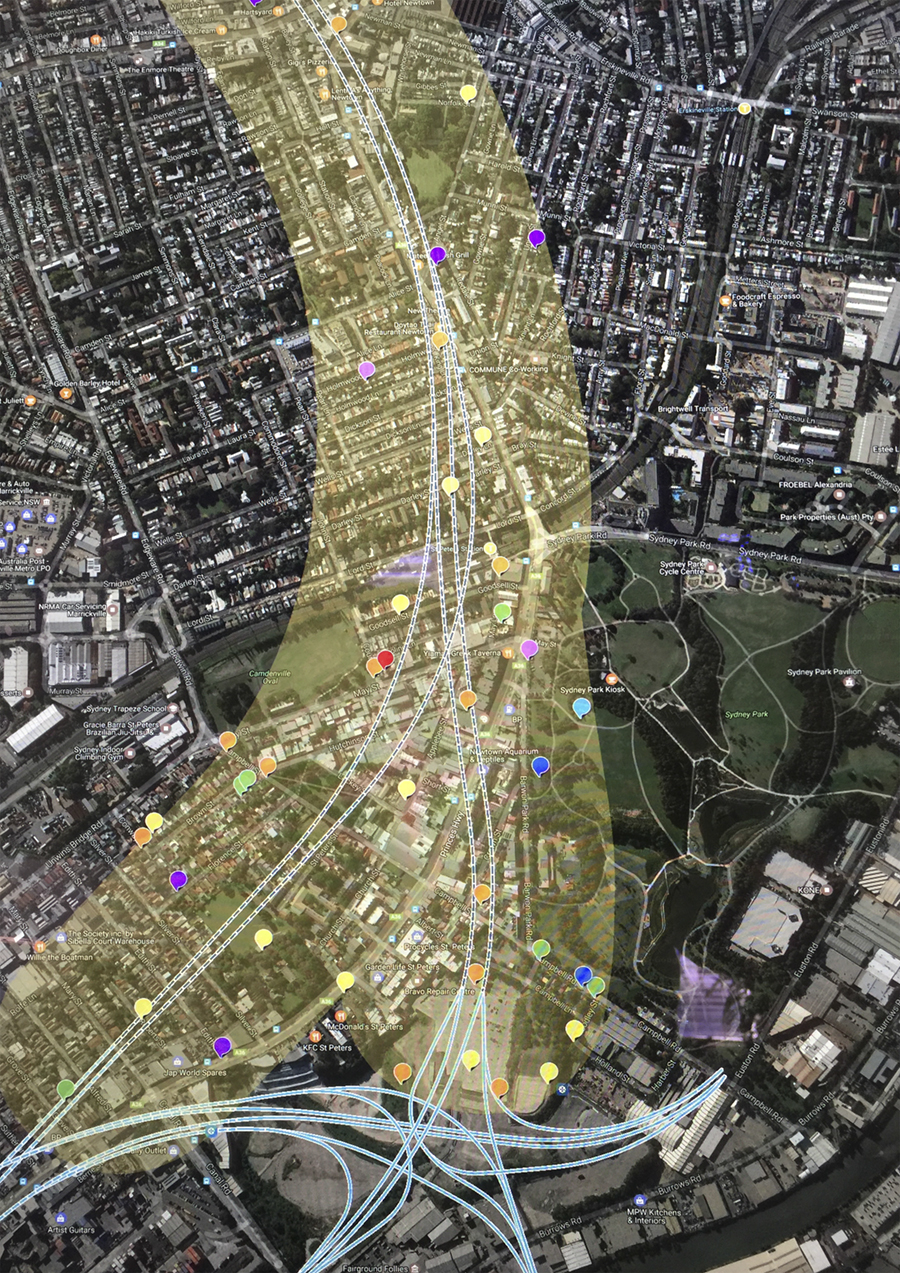 Only "indicative": An example of the wide-ranging WestCONnex M4-M5 Link tunnel map

When residents asked by the animations on the wall didn’t seem to fit with the maps of the tollways in the Concept Plan Document, they were told by several WestCONnex staff that all the information was only ‘indicative’ at this stage.

Indeed the images are so vague that when residents turned up with some large high resolution google maps, they attracted more interest than the exhibits.

Residents will only know for sure if they are affected when planning approves the Construction Plan - this is one of a number of plans which NSW Planning approve for major projects after approval has been given While Councils may get an opportunity to comment on some of these plans, the public have no right to make submissions or even comment on the route or anything else in the construction plan, including how many heavy trucks will leave construction sites in an hour.

Those within 50 metres of the two four lane tunnels will be contacted will be contacted by Construction Consortium Communtiy engagement staff who will give them the opportuntiy to get an ‘independent’ property report. This is supposed to offer them protection if their property is damaged by the project as several properties have been already by the New M5 and M4 East. By the time this happens, the SMC will have been privatised, leaving residents trying to deal with major global companies with massive resources.

The EIS is being done by AECOM which did the two previous EIS and has many interests in the WestCONnex project and a well publicised failure in earlier traffic projections for failed projects in Brisbane, which led them to pay out approximately half a billion to settle class actions by investors.

SMC have stated that the EIS,  will be lodged in the 2017 third quarter in August or September. Community groups and Councils will push the Minister of Planning to extend the minimum time for submissions from the statutory minimum of 30 days.

Little new information emerged at the consultation sessions, but we can confirm the following:

Leichhardt session: More of the same

The second information session at Leichhardt on Saturday 27 May was hidden away in the back reaches of the Italian Forum.  An SMC security guard in civvies guarded the top of the forum steps. If it was not for the Leichhardt against WestCONnex posters residents might not have found the session at all.

SMC staff were clearly not enjoying the experience of telling residents again and again that nothing is fixed.

The RMS air quality person (SMC have none of their own) and Stage 3 EIS manager were both missing and there was only one engineer who could answer questions.

There was a WestCONnex motorway game to keep kids amused. 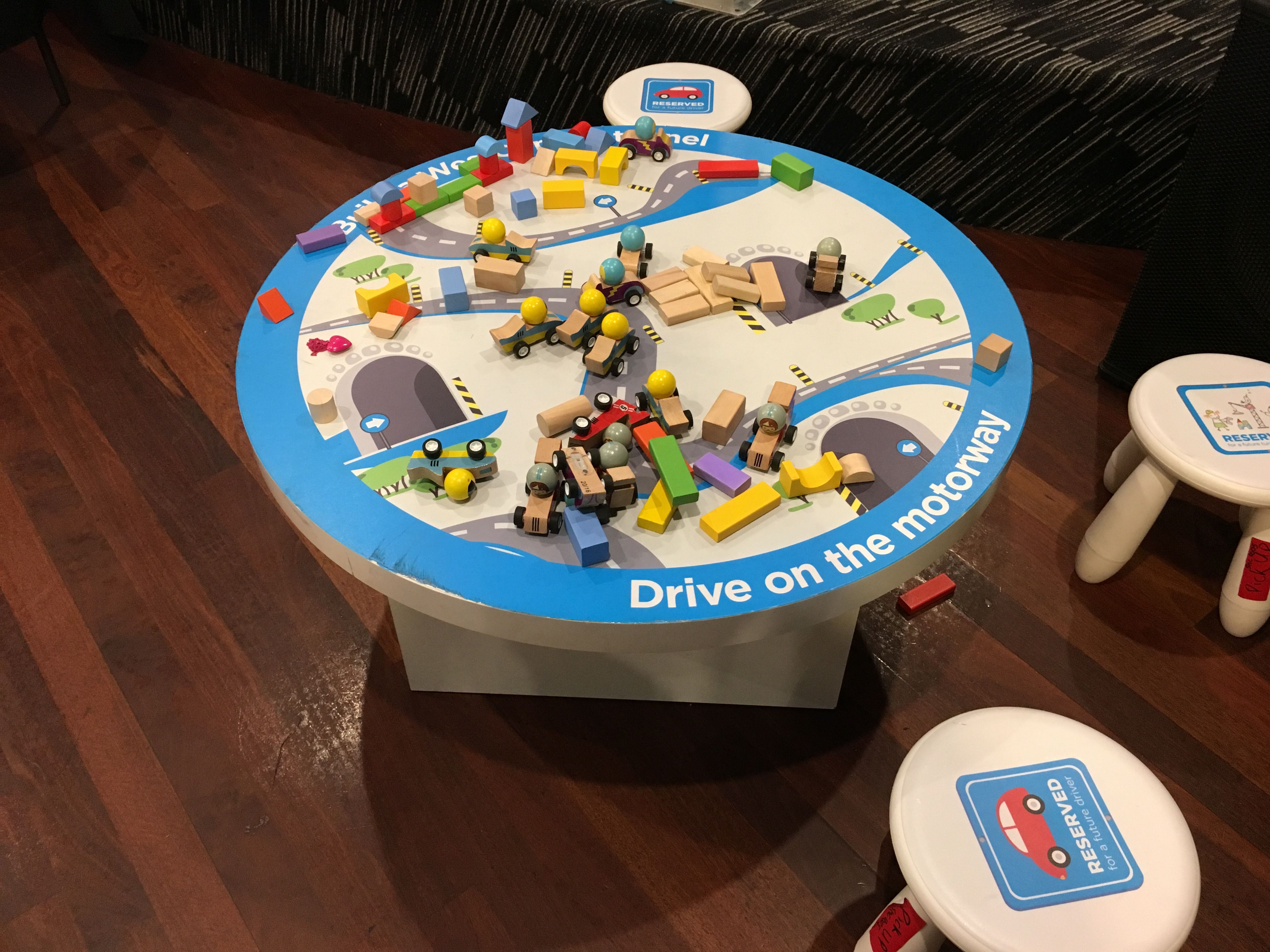 Rat-runners avoiding the toll tunnels and wrecked buildings: an eerily accurate glimpse into WestCONnex. Yes, those chairs really do say "Reserved for a future driver".

This is the first time they have been to Newtown since the residents who packed out Enmore Theatre told them what they thought of WestCONnex in early 2015.

Wherever you live, make sure you are there to tell them that the community is no more impressed than it was in 2015. The only difference two years has made is an understanding of how much damage the project continues to do to communities and how unaccountable SMC are for that damage.