NO CONVICTION FOR WESTCONNEX PROTESTER ARRESTED AT SYDNEY PARK 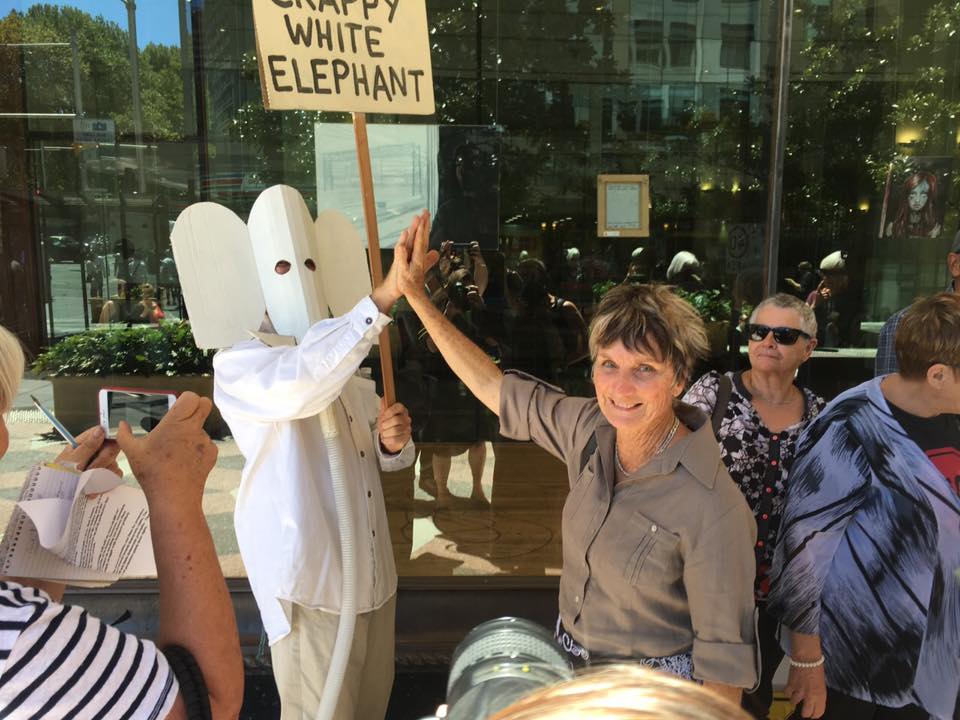 A relieved Glenys Waddell after her court appearance.

Ms Waddell had been charged with aggravated trespass under the Inclosed Lands Act, which was introduced by the Baird Liberal Government last year to increase penalties for political protest. She pled guilty to the charge, but no conviction was recorded by Magistrate Susan McIntyre.

“I am relieved with the result. I will be joining the anti-WestConnex protests again,” said Ms Waddell, who was facing a fine of up to $5,500 if convicted.

In a statement handed to the Magistrate, Ms Waddell said: “I want it known that I climbed the fence in Sydney Park to protest against the destruction of the magnificent trees, after our legitimate protests had been ignored.

“My action was not planned, it was the pain and anguish of not being heard that pushed me into the direct nonviolent action of trying to protect the trees. I had watched these trees grow for some 20 years and I was involved in the initial planting.

“The right to protest and be heard are basic democratic principals. These penalties and the treatment of protesters quash these rights.”

Pauline Lockie of WestCONnex Action Group welcomed the result, and said the harsh treatment of residents who protest against WestCONnex contrasts sharply with the treatment of tollway contractors who breach the law.

“WestCONnex contractors have been caught breaking basic health and safety, environmental and traffic laws and haven’t even received a slap on the wrist," said Ms Lockie.

"But the residents who are standing up to WestCONnex's destruction are facing huge fines and lengthy court processes.

"Our police should not be used as private security for the corporations building Premier Gladys Berejiklian’s deeply unpopular WestCONnex tollway.

"And these draconian anti-protest laws should not be used to try and shut down our democratic right to protest, and put brave residents like Ms Waddell through huge emotional and financial stress for defending our city.

“It’s time for Premier Berejiklian to step in, halt WestCONnex, and conduct a full review into the project,” said Ms Lockie.