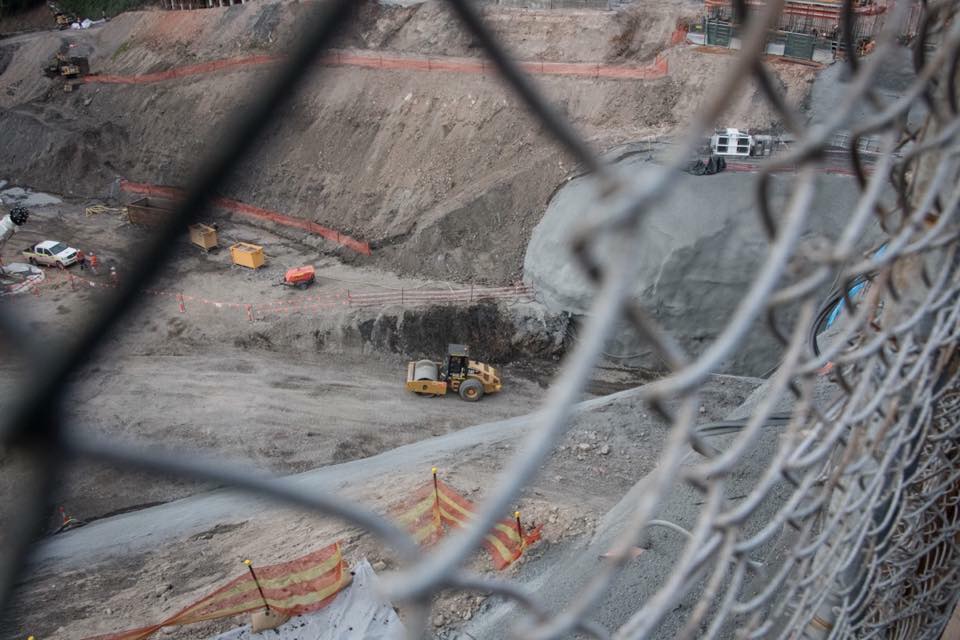 As well as dust and non-stop construction noise, for more than 5 months residents in a broad area around the WestCONnex St Peters Interchange construction site have been subjected to continuous outbreaks, some lasting for days at a time, of very strong sulphurous odours from the deep excavation works at the old Alexandria landfill site. This happens as digging uncovers leachate (pockets of old garbage soaked in water). The pungent rotten egg stink has been causing residents serious distress and health impacts, with many reports of headaches, nausea, burning nose and throats, and breathing difficulties. A number have obtained medical certificates because of the effects and parents have kept their children home from St Peters Public School, less than 500m from the site, on bad days.

Because of many, many community complaints, the EPA began investigating the issue and in March 2017 issued a Prevention Notice against the New M5 contractors, CPB Contractors (a CIMIC (Leightons), Samsung and Dragados joint venture), requiring CPB Contractors to stop the stench.

Despite the Prevention Notice, the foul smell (and complaints) continued every time the excavations hit leachate (or it rained heavily). The EPA‘s initial weak response was to require CPB Contractor only to survey the community, appoint a smell expert, measure and report on outbreaks, and “mitigate” the smell with deodorisers. Finally, after continuing breaches and complaints, the EPA required CPB Contractors to install two additional leachate treatment plants at the site, and on 19 June 2017 issued the next level of sanction, a Clean-Up Notice.

WAG wrote to the NSW Environment Minister, Gabrielle Upton MP, and the Chair & CEO of the EPA, Barry Buffier AM, denouncing these as completely inadequate sanctions, and calling for the issue of the ultimate  sanction under the EPO Act, a stop work order, or Prohibition Notice. Last week Mr Buffier responded:

"..a Prohibition Notice is not available in this instance, as the project has been declared as Critical State Infrastructure and under section 115ZG (3) (d) of Environment Planning and Assessment Act 1979 (EP&A Act) and is exempt from this type of POE [Act] regulatory tool."

This part of the EP&A Act (enacted by the NSW Govt principally to take WestCONnex outside normal planning laws and Council approvals) stops the EPA from issuing orders or notices “so as to prevent or interfere with the carrying out of approved critical State significant infrastructure”. In other words, the EPA can issue Prevention Notices, Clean Up Notices, Licence variations and fines, but cannot compell WestCONnex to stop work if these are breached.

It is shocking enough that the EPA has been blocked from stopping works that are breaching environmental laws and having serious impacts on residents, but its response to the continuing breaches at the St Peters Interchange has been lacklustre - a Penalty Notice and, on 27 July they finally issued a fine, but only for $8,000. This is a completely insignificant amount to CPB Contractors and their multi-billion dollar contract to build the WestCONnex New M5.

Even more worrying, the body created by the NSW Govt to implement and finance the WestCONnex project, Sydney Motorway Corporation (SMC), and its hundreds of contractors and sub-contractors, are all private corporations.  So this exemption effectively puts private corporations with deep pockets beyond compliance, and outside ultimate enforcement of the POE Act.

The EPA is well aware of the effects on residents. In his reply to WAG, Mr Buffier confirmed the impact of these breaches on the community:

“The Environment Protection Authority (EPA) shares the WestConnex Action Group’s concerns regarding the impacts of odours on the surrounding community. The EPA has received a significant number of complaints from residents, business and the local school in relation to the site since mid-March 2017.”

Even WestCONnex has previously advised residents to remain indoors and close all doors and windows, and acknowledged that people with existing respiratory conditions “may see a worsening of symptoms”.

To levy a fine of only $8,000 amounts to nothing more that a slap on the wrist and is a totally inadequate response from the environmental regulator. And despite the orders, notices and fines issued by the EPA, the odours continue to emanate from the site, as recently as last weekend. WestCONnex is clearly either unable or unwilling to do what is required to stop the stench.

"Every time the contractors for Westconnex hit leachate in the old Alexandria tip, the fumes make there way down to our building, and I choke and cough sometimes catch my breath and become unable to breathe properly. I make sure I take my Ventolin inhaler every day...

"EPA are happy to take my complaints, and tell me to call every time, to point that when I didn't complain for a week they called me to ask if the smell had gone away, I informed them I had been on annual leave and not in the building affected by the fumes.

"Each time I speak with the EPA they ask if I would [like to] be patched through to the contractors, something I hate. Why you ask..

"the headaches I get after the incidents last for a couple of hours and today the smell made the inside of my nose burn... I suffer from Fibromyalgia, stress triggers it among other things. So you can imagine why I am tired and over it most nights.”

Julie and other residents have obtained doctors’ certificates for the health impacts of the odours.

Without strong regulatory intervention  and substantial fines, WestCONnex will continue to ignore the impact on residents. In fact, CPB Contrators now appear to be treating the outbreak of odours as inevitable, and as though all they are required to do is to keep residents informed. Two days ago CPB sent this to residents:

"We would like to let you know that tomorrow we will be making small excavations in the former Alexandria landfill site to confirm groundwater levels before full excavation. This may expose some areas of leachate and may release odour.

Next week (from Monday 14 August to Friday 18 August) we are planning to start excavating the main cut (deepest part of the site) for the permanent road. This may also expose some areas of leachate which may release odour."

This appalling breach of environmental laws and disregard of health impacts on surrounding residents would not be permitted in any other project, and cannot be permitted for WestCONnex. WAG has called on the EPA to take real action by taking CPB Contractors to court for these breaches and demanding substantial and punitive fines be imposed.