WESTCONNEX Action Group (WAG) has slammed the Baird government’s plan to start tunnelling works for the WestCONnex New M5 tollway at the St Peters interchange site next Wednesday, labelling the move “disgraceful” when so much of the project’s design and impact remain unknown.

St Peters residents were given just five days’ notice of the works, which will run up to 24 hours a day.

“WestCONnex will be a disaster for Sydney, because the Baird government’s so-called ‘planning’ for this tollway has been a complete farce,” said WAG spokesperson Pauline Lockie.

“It is disgraceful that they’re now gearing up to destroy large parts of St Peters and waste even more taxpayer dollars on expensive tunnelling when they are still making WestCONnex up as they go along.

“The Baird government still hasn’t released a final design for the WestCONnex New M5. And the recent removal of the WestCONnex Camperdown interchange also means that the traffic, air quality, noise and financial projections for the New M5 are now wrong.

“The effects of this are going to be especially severe for the St Peters Interchange, as drivers who use WestCONnex will have to enter and exit there if they want to go to and from the CBD and south west.

“That’s going to have a huge impact on traffic congestion and pollution on St Peters and the surrounding suburbs, and threaten the vibrant businesses in Newtown. But the Baird government hasn’t released any updated information about how this will affect residents or road users.

“The removal of the Camperdown interchange is also bound to damage WestCONnex’s already slim prospects of recouping its massive taxpayer-funded cost.

“The Baird government is treating the public with contempt by starting tunnelling for the WestCONnex New M5 when there are so many unanswered questions about the project – and when it will see drivers from western Sydney pay tolls of up to $25 a day to drive straight into inner-city traffic jams.”

The notice came as scores of residents are signing up to adopt trees in and around Sydney Park to protect them from WestCONnex ahead of the official Adopt a Tree launch event on Sunday.

“We’ve already seen how destructive WestCONnex has been in places like Haberfield, and residents are not going to stand aside as Mike Baird destroys even more of Sydney for this disastrous tollway.

“Work at the St Peters Interchange, along with the rest of WestCONnex, should be halted immediately and a full inquiry held before more of our money is wasted,” said Ms Lockie. 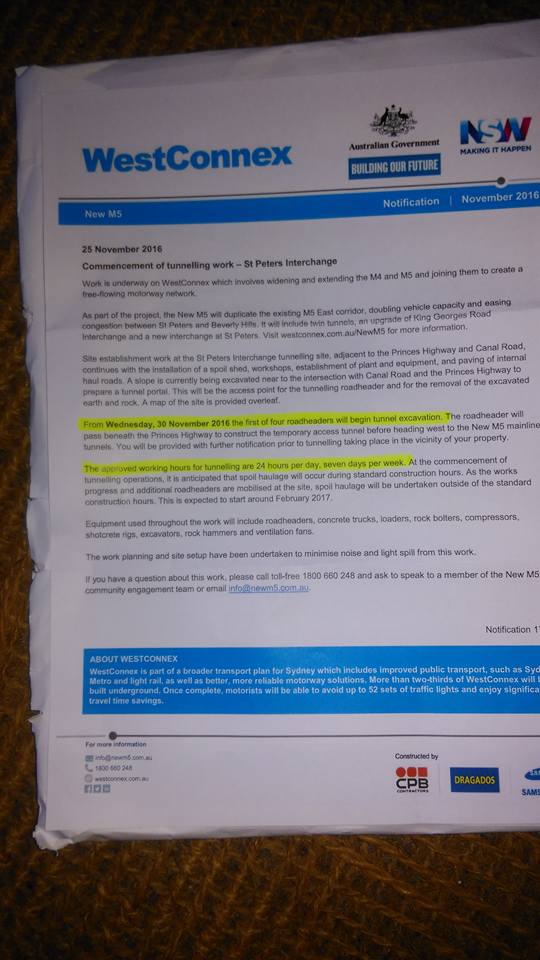