Over the last week, residents have been blockading the critically endangered Cooks River Castlereagh Ironbark Forest (CRCIF) at Kingsgrove to stop it being destroyed for the WestCONnex New M5. Here are some reports from members of the Wolli Creek Preservation Society, who'll be there with other residents every day this week - please join them if you can. Details below.

Monday 5 September 2016
Between 7.30 and 8 am many more construction staff were in the vicinity of the Kindalin underpass, adjacent to the bushland, and soon after a large excavator came in from the southern construction compound (southern side of current M5) and drove under the Kindalin underpass. Workers had just cut the fence below a very steep embankment on the eastern edge of the underpass. This track machine then attempted to haul itself up the steep bank, and was unable to - we have video footage of it struggling and almost tipping back as the combination of slope and wet soil proved this wasn't possible. The incident was reported to WorkSafe - we were on the open public pathway in fairly close proximity to this activity, as were construction staff. 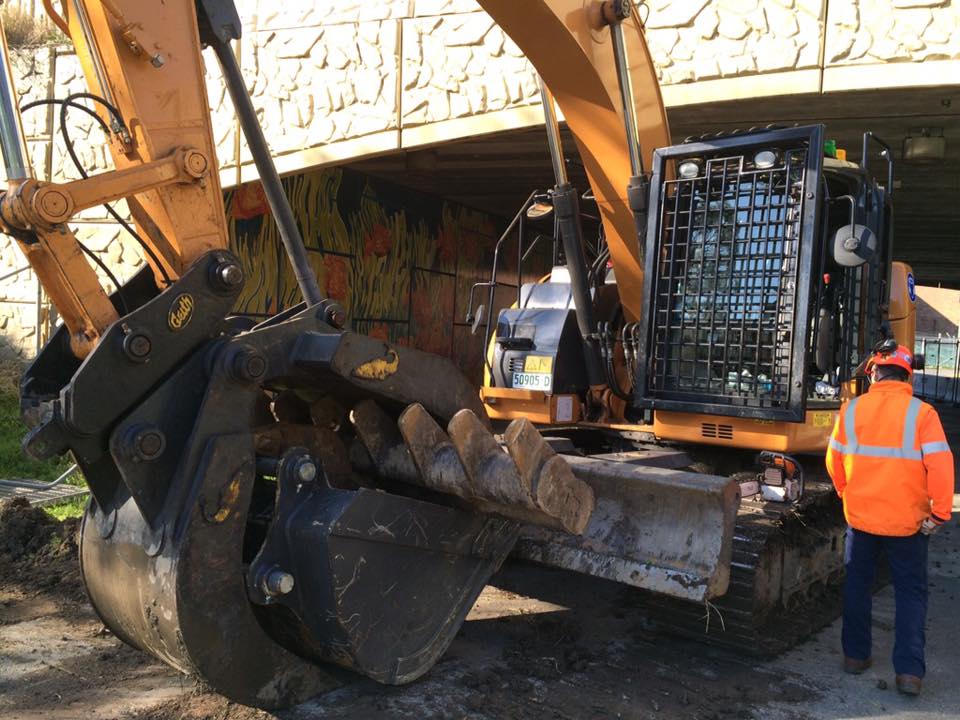 On the other side of the pathway, (within the area where the bushland is ) and around the same time, a Bobcat and surveyors with their equipment arrived. The surveyor took sightings there and then went into the bushland areas via the closed pathway, and presumably took further readings. We think establishing the precise boundaries for clearing.
We remained on the pathway in front of the gates in the site fence with our placards while a lot of conferring seemed to go on amongst construction staff - and the excavator remained idle. This is one point of access to the bushland for equipment. This conferring went on for some time. 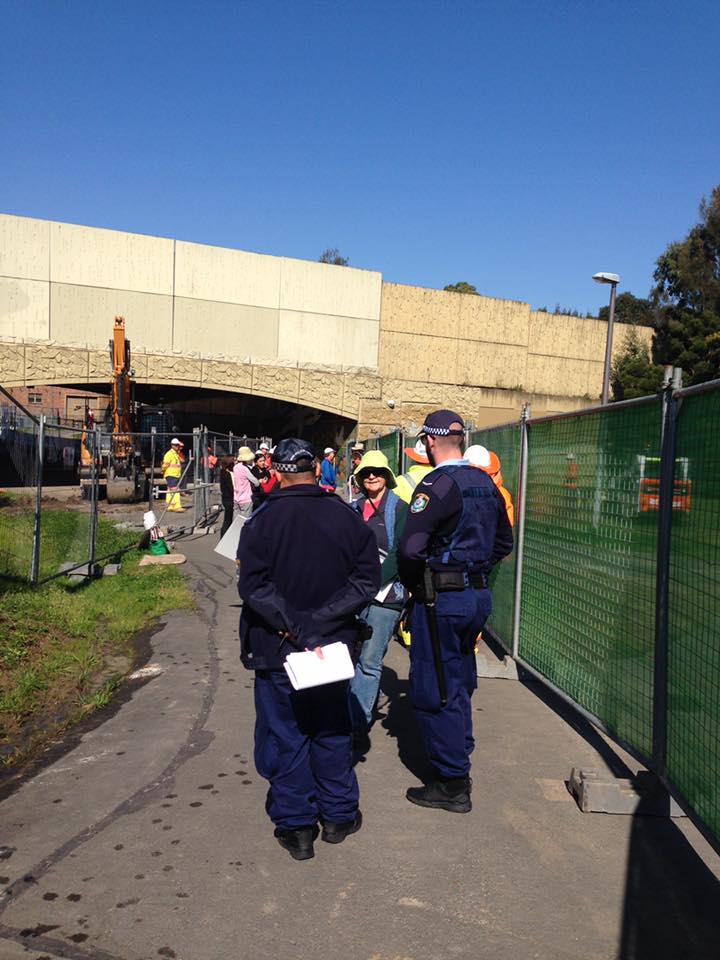 Two police constables then arrived and talked to Sharon and me. We explained our need to see the approval to close the pathway, and our concern about possible non-compliance with a number of conditions relating to the clearing. We were not allowed by the police to see the approval documentation they had been given. Sharon requested to see their senior officer and they went away and later came back with a Sergeant from Kogarah Police Station.
We were duly warned about blocking the pathway and inhibiting work, as they needed to take the excavator across the pathway, and about their powers to enforce this. Six of the 12 people who were there at that point indicated they were prepared to be arrested if it came to it. This discussion with the police took quite a bit of time, and the police were also conferring with construction staff.
Eventually the Sergeant indicated that he had been advised by the construction staff that they were not going to be clearing the bushland today, but needed to move the excavator through the gates and across the pathway so that it could presumably be taken to wherever it was going when the operator tried to get it up the steep bank.
After this advice was repeated by the police to all present, we accepted that was the intention and moved aside for them to open the gate and move the machine. 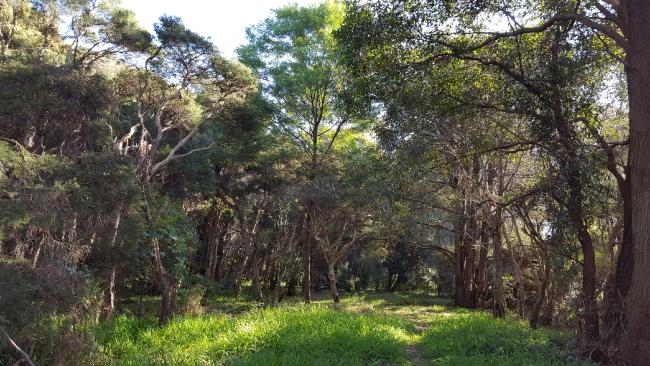 While all this was happening info. was going out to various people, journos and organisations. A SMH photographer arrived just as were were moving back from the opening gate and he got some shots.
This all took us about 3 to 4 hours, and as a result, the bushland is still there, and more people know about what is happening. But things are getting closer re preparations to clear and they might well begin clearing any day from here on in.
People will be down there again tomorrow to maintain a presence and ensure that they are operating within whatever shonky conditions of consent they have been given, so if you have some time please come down and lend support - from 7.30 am. Come in via Rosebank Ave. or Tallawalla St to just north of the underpass. 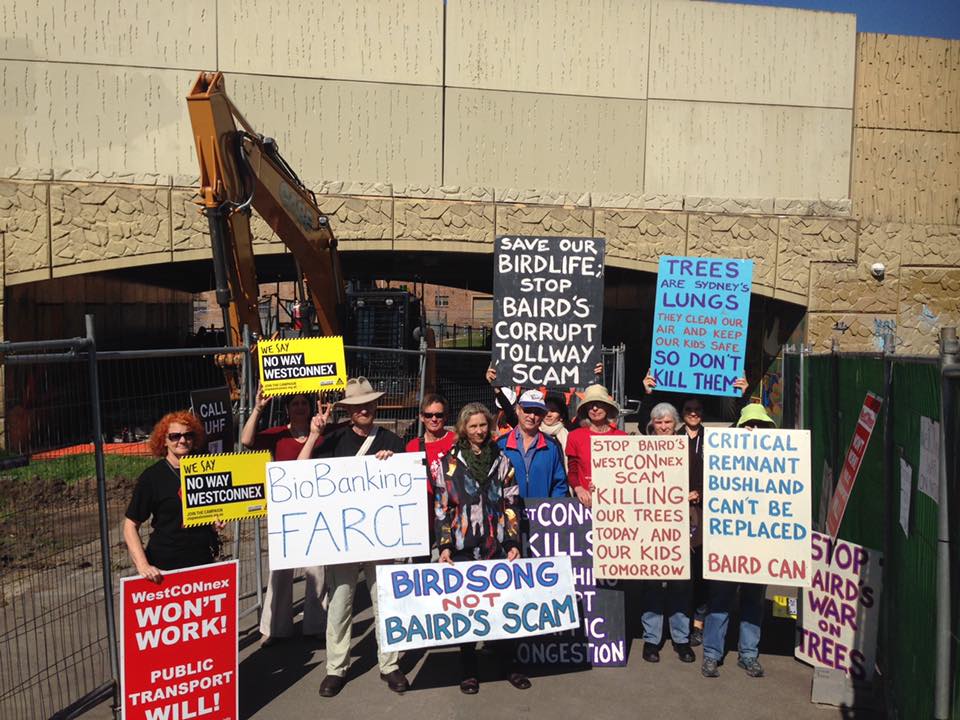 The fence around the bushland has just been taken down. Although there is no machinery currently in sight, if you can go, now would be a good time. But people will be needed tomorrow and Thursday as well - let us know if you can make those days. 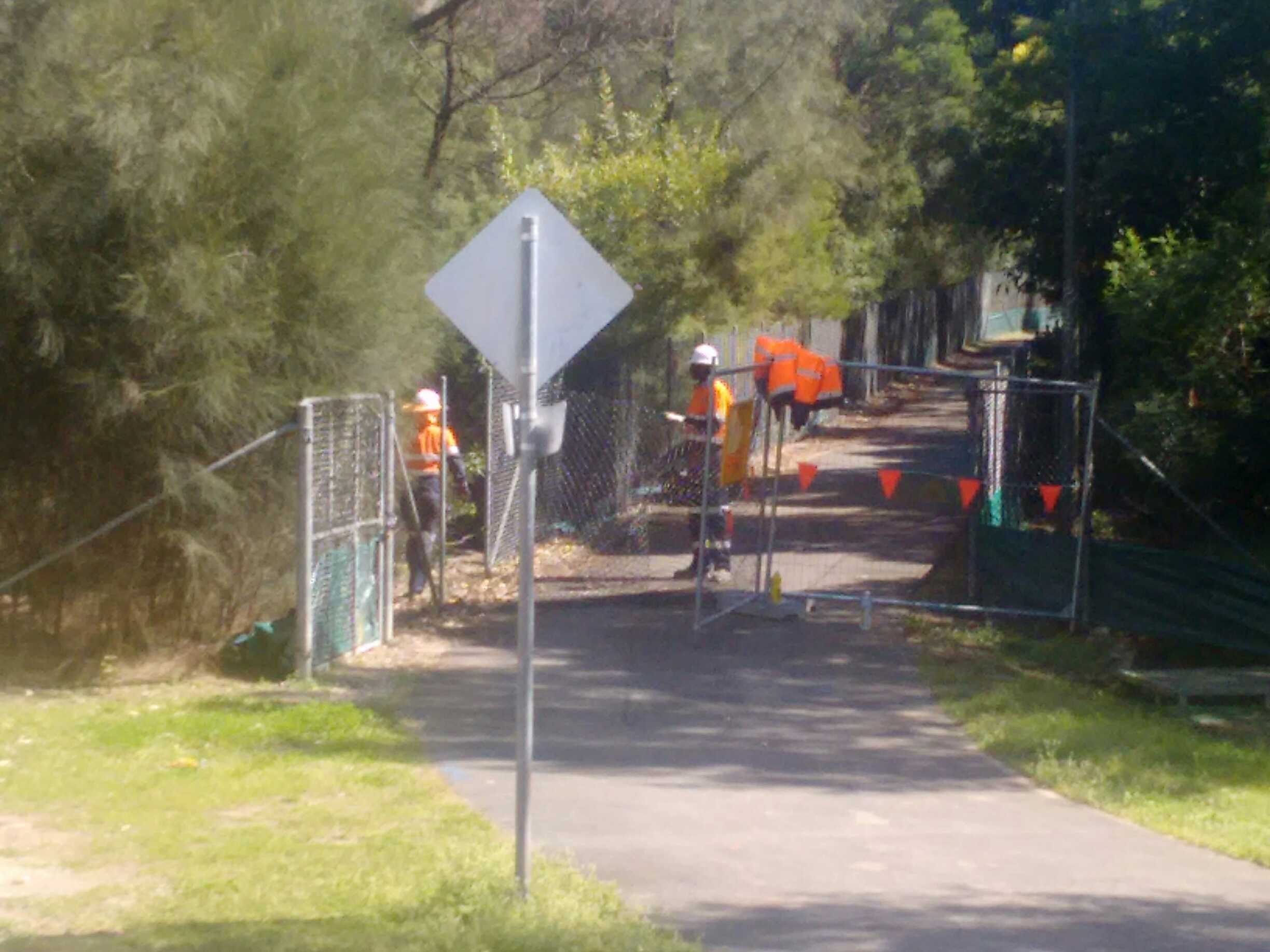 Heading to the protest

Enter 82 Rosebank St, Kingsgrove, into your phone / GPS to be directed to the path into the CRCIF area.
At the cul de sac at the end of Rosebank St, walk straight ahead. Do not veer onto onto the left heading footpath.
Walk straight ahead on what looks like a path into a construction site.
But it is actually a public path way. Keep walking.
Approx 100 metres along,  and BEFORE the M5 motorway underpass, stop. On your right, you'll see the CRCIF.
westconnex action group forest Mike Baird endangered destruction westconnex toll road New M5 CRCIF powerful owls environment biodiversity Greg Hunt Wolli Creek
Do you like this post?
Tweet