On Sunday, 14th August 2016, a capacity crowd packed the Sydney Park Pavilion for the WestCONnex: Driving Sydney to Destruction to hear Sydney Lord Mayor Clover Moore, Dr Mehreen Faruqui, Jonathan Moylan, Lorrie Graham and Janet Dandy-Ward (WAG) highlight the terrible impacts of WestCONnex on our community and on the environment.

WestCONnex Action Group organised the event to provide information to our community which the Baird Government has woefully failed to do, to let people know that WestCONnex can still be stopped and what people can do to get involved.

The event began with Lord Mayor Moore wrapping an aged tree at the corner of Euston and Sydney Park Roads in Alexandria with a blue ribbon to highlight the proposed destruction of that copse of trees and other parts of Sydney Park for the WestCONnex St Peters Interchange. This ribbon joined hundreds of others tied to trees due to be destroyed along Euston Road for WestCONnex . According to a rough count by City Hub, more than four thousand trees are slated for destruction in and around Sydney Park alone.

The event then continued at the Alan Davidson Oval Pavilion, less than 100 metres from the Euston Road intersection, with information and maps on the proposed WestCONnex works in the area on display, and expert speakers on the impacts and effects of WestCONnex. 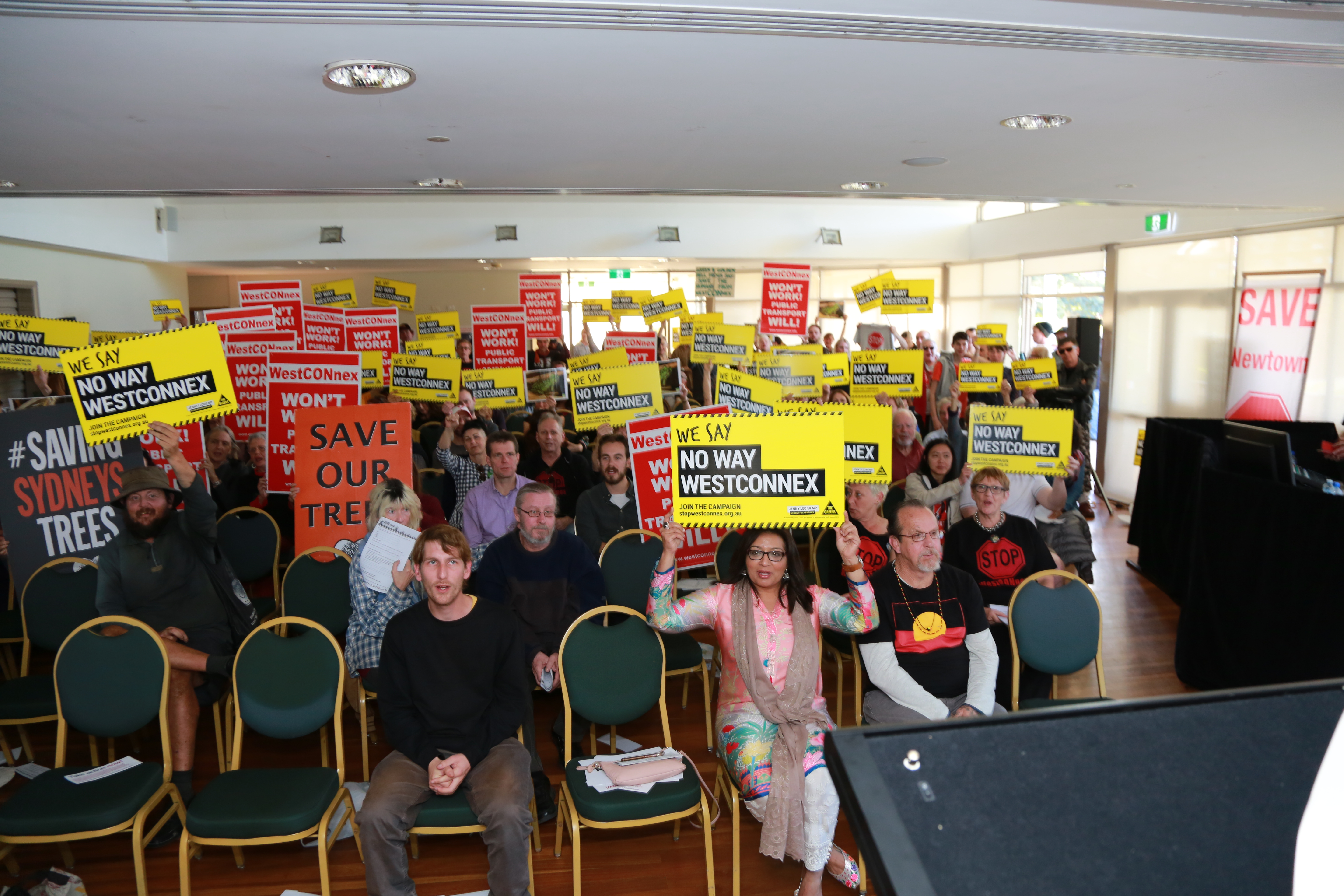 Rap artist and poet Nick Bryant-Smith (aka Solo) from Inner West band Horrorshow opened the meeting with a reading of their “Listen Close”, poignantly relevant to WestCONnex:
“I see it everyday, the heritage fades,
Gentrification, nothing's gonna get in the way,
Of this concept that we call progress,
Locked in a contest with our superiority complex,
Monuments to man's dominance are the imagery,
Scaffolding sketches out the blueprints of visionaries,
In a city still growing out it's infancy,”

Uncle Ken Canning provided an acknowledgement of country that went to the depth of the ongoing destruction of our shared land and heritage.

Lord Mayor Moore called “WestCONnex the worst of all the destructive projects that Premier O’Farrell and Premier Baird have visited on this City, and it’s supported by the Labor party, Federal and State”, decried the lack of community consultation, the secrecy surrounding the project plans and vowed to continue her fight against the project. She emphasised the importance of Sydney Park and the millions spent by Sydney City Council to upgrade the Park and the water harvesting lake system.
As well as a 1,000 sqm section along Euston Road to be taken for WestCONnex, traffic along Euston Road is forecast by Sydney City Council to increase from 12,500 cars per day to 75,000 cars per day. The noise and pollution generated by this motorway would squeeze the entire Park inwards, impacting on many areas including exercise equipment zone, a planned urban farm, a children’s bike park, a small bird wetland and will destroy some parts that have been especially cultivated to attract birds and butterflies.

Without adequate provision for this additional traffic, local roads will become rat runs and not surprisingly, levels of deadly fine particulate pollution will rise in nearby parkland and local streets.

Greens MLC Mehreen Faruqi summed up the views of many when she told the meeting, “According to the Baird government, it’s good for us that traffic will disappear down a tunnel and leave the streets relatively free, but they forget to mention that traffic going into a tunnel has to come out somewhere and the 1000s of cars that come out of the interchange here and will be funnelled into already congested local streets. With the Green Square development going ahead population is already set to increase around here and not many plans to improve public transport, we are going to face traffic chaos and literally a standstill.” Dr Mehreen Faruqi ‘s funny and informative speech can be found at: http://www.mehreenfaruqi.org.au/speech-to-westconnex-driving-sydney-to-destruction/

Photo journalist Lorrie Graham spoke to her devastating images of the destruction already caused by WestCONnex, and Grant Website , independent environmentalist and frog specialist, explained how the Green and Golden Bell Frog is threatened by the construction works at the Kogarah Golf Course which is one of only two habitats of the endangered frog. 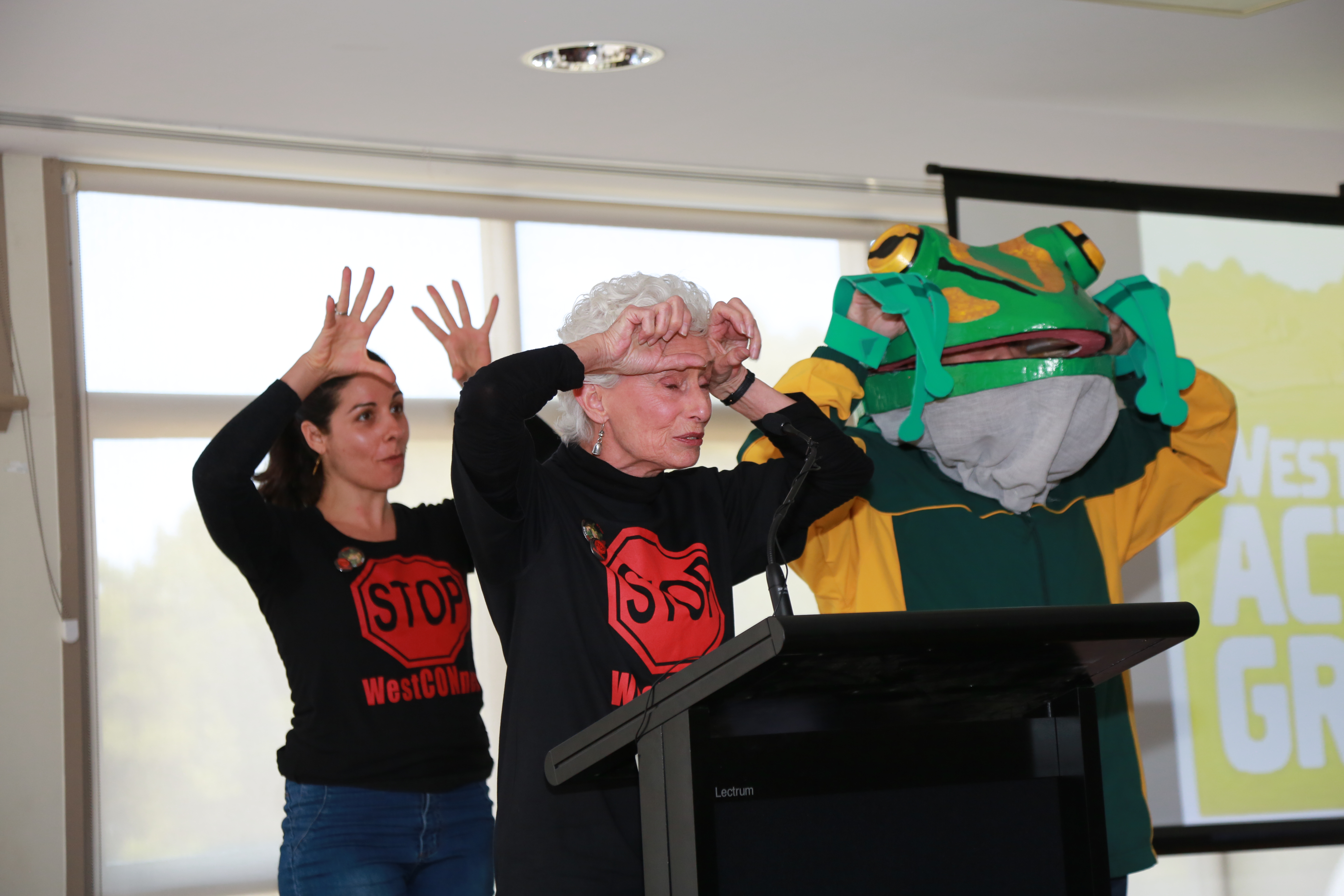 Jonathan Moylan spoke inspiringly about the successes of other community actions and what can be done to stop WestCONnex. Janet Dandy-Ward spoke about her personal story living in an area to be destroyed by WestCONnex, the continued fight and how it feels to already have lost so much. Janet and her family live in St Peters and will be 150m from a poison stack: “I’m one of those left behind! BUT we know that this is just the start of this in St Peters and we know that the destruction that has happened and cannot be reversed in Haberfield, Kingsgrove, Ashfield, Strathfield, Concord, Granville …….. is coming this way UNLESS we HALT this project and STOP the devastation”

We would like to acknowledge all those that helped on the day, the amazing cakes donated, sausage sizzle held and donations raised some much needed funds. If you can help to fund the fight against WestCONnex, you can donate here 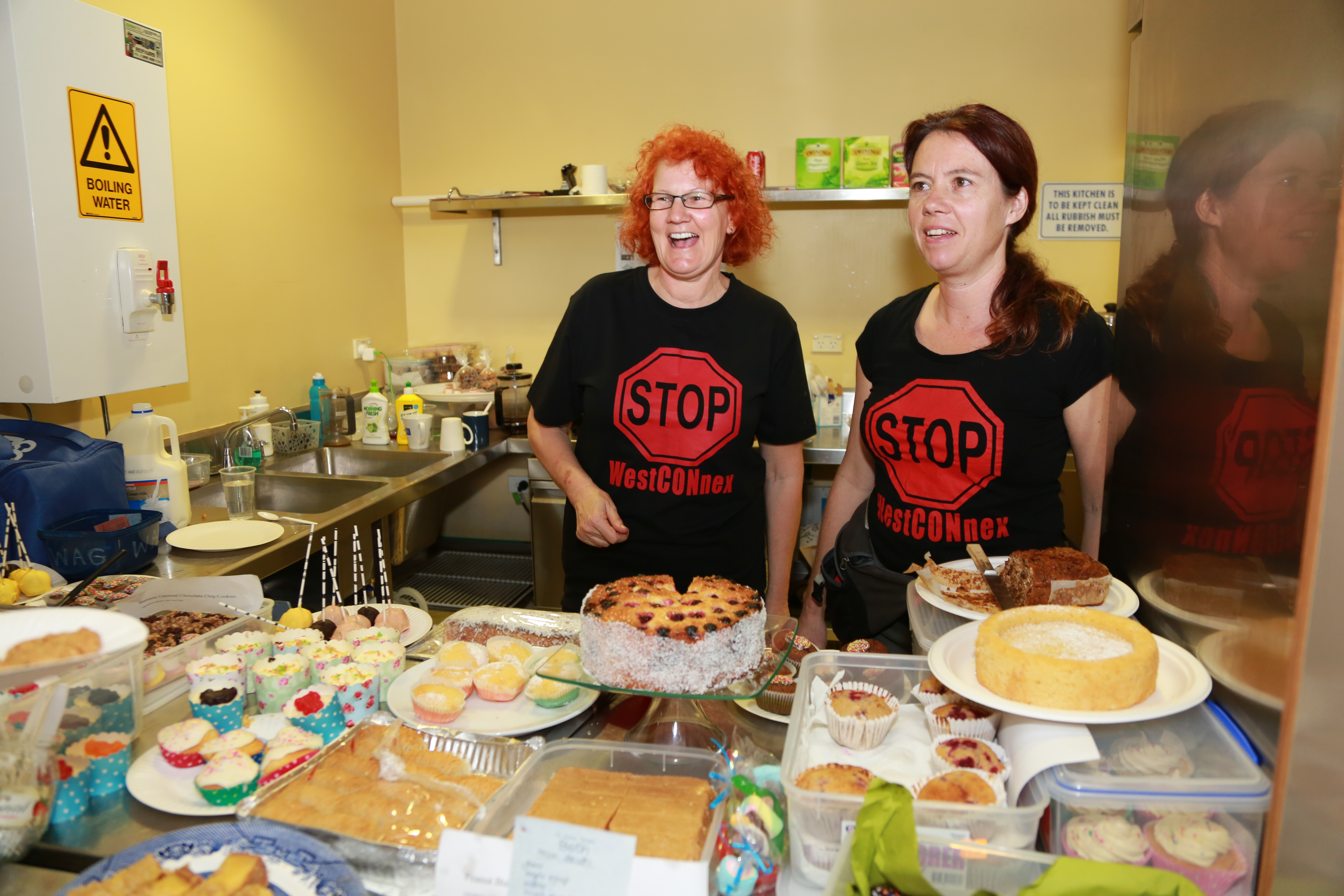 Thank you to all those who were inspired to get involved in the fight against WestCOnnex, and in the next few weeks we’ll be getting in touch with those that committed to taking action such as social and other media, direct actions, fundraising and research and writing. If you would like to help, drop us a line at info@westconnexactiongroup.org.au.

For those interested in direct action, we will shortly be publicising details of a public protest to be held on Saturday, 3rd September, and No WestCONnex: Public Transport are holding a direct action Workshop on Sunday, 28th August 2016, see the link below for further details: Join us on Sunday 28th August for Stop WestCONnex Non-Violent Direct Action Training!