Jon lives with his young family in Haberfield. But sadly, they won't be there for much longer. He kindly shared his story with us, along with video and photos that prove once again the contempt with which Mike Baird and WestCONnex hold residents affected by their disastrous tollway.

My young family of 3 made the move 9 mths ago from the city to Martin Street, Haberfield, seeking a quiet neighbourhood with parks for our young ones to run and explore and be safe. A clean, quiet, dust-free area to live. Where you could relax and enjoy the whistling sounds of the old tall trees talking to each other, while not needing a dust mask to breathe. 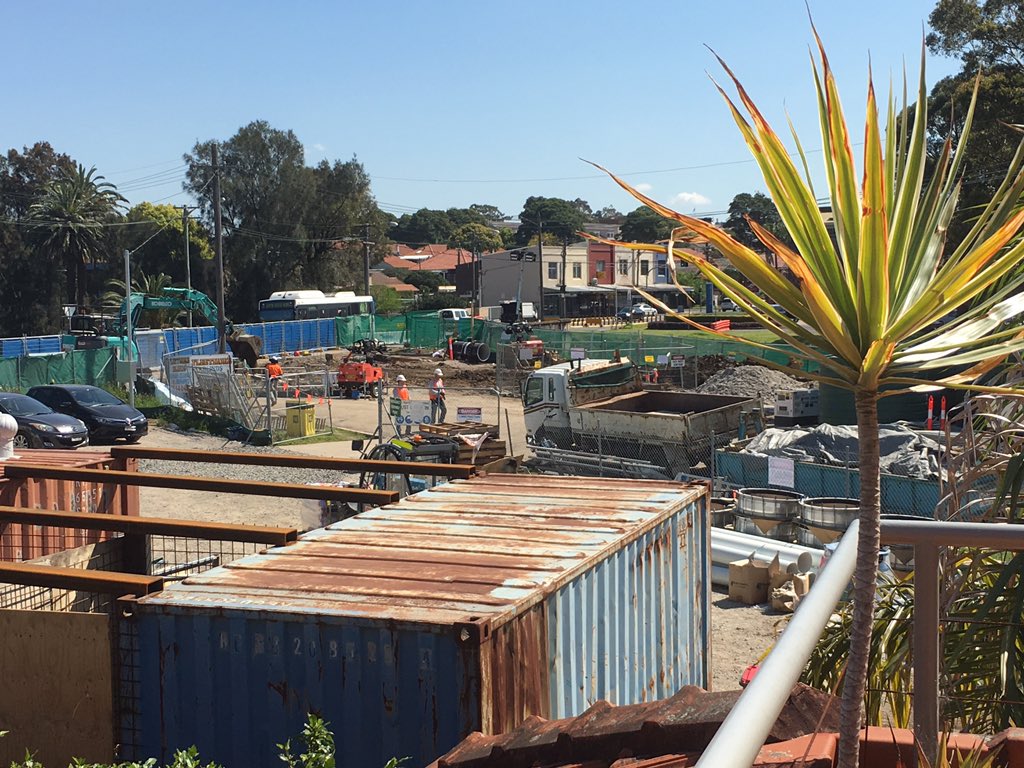 Then WestCONnex happened. The view from Jon's house.
We now have a beautiful newborn, who at best of times doesn't sleep. But when she does let us sleep, all we can hear is loud machinery and the sounds of workers yelling out to each other.
They told us there'd be "minimal noise and no heavy machinery during the night hours". But as I've witnessed, they have been using extremely loud concrete cutters and angle grinders from 8 pm to 3am, which has left us sleep-deprived and with constant headaches.

They said there will be minimal noise at night!
Restricted heavy machinery !
It's right under our doorstep
WestConnex we can't sleep !

We live on a dead-end street directly beside the construction zone, with multiple trucks entering the worksite blocking our only way to get out.
This will be an ongoing problem for many in this neighbourhood for some time, so we have decided to lift up and make the move.
It's Sunday midnight as I write this and I can hear a lot of noise outside my bedroom. Looks like another sleepless night in Haberfield.
If only this was a movie that could be turned off and call it a bad dream!

When it's Night it's Day in Haberfield "you are my sunshine you make me Unhappy" #WestCONnex pic.twitter.com/WYMZEoe6PU

UPDATE: The day we published this story on our website and social media, Jon received a 'compensation' offer from the Sydney Motorway Corporation: two movie tickets. Understandably, he was a little less than impressed.

Thank you #Westconnex for these (2) tickets but you need to compensate a little harder next time pic.twitter.com/mByMceBAlg