Many people are understandably confused about whether WestCONnex's Federal funding has been paid, and whether it can be stopped. So we put together this quick guide as to what's been paid, what the pollies have said, and what can be done to halt what's left.

The Australian National Audit Office (ANAO) announced in May that it would investigate Tony Abbott's decision to commit $3.5 billion in Australian taxpayer money to WestCONnex. This Federal funding consists of a $1.5 billion grant and a $2 billion concessional loan. Not all of this money has been paid.

What's left of the grant: The payment schedule shows that after the Federal election on 2 July, at least $300 million will still be unpaid:

What's left of the loan: The latest Federal Budget shows that come election time, only $38 million of the $2 billion will be paid:

This means that in total, over $2.26 billion of WestCONnex's Federal funding will still be outstanding after the Federal election. This has been confirmed by Malcolm Turnbull's Minister for Major Projects, Paul Fletcher, in press releases and interviews.

Why was Labor saying the money's gone?

We don't know. But Labor repeatedly stated that the Federal funding was already paid, or would be by the Federal election. Neither is true.

At a Labor event in Arncliffe on 31 October 2015, Anthony Albanese stated incorrectly that:

"Already $2.75 billion dollars in the form of a loan and a grant has already been paid for the project. Prepaid." Anthony Albanese, 31 October 2015

Albanese staffer and former Leichhardt mayor Darcy Byrne reiterated this at a public meeting at Balmain in April 2016:

After promising Labor would provide "not one dollar" to WestCONnex if elected on 2 July, Albanese then told a public meeting in Balmain on 19 May 2016 that this wouldn't apply to the existing funding, stating that:

"...$1.2 billion of the $1.5 billion [grant] has already been forwarded...The $2 billion [loan] has been signed as a legal document between the Commonwealth and the state government...it happened more than a year ago, that that has been put in a fund." Anthony Albanese, 19 May 2016

Labor also distributed a flyer at this meeting that falsely stated all the money would be paid before the election: 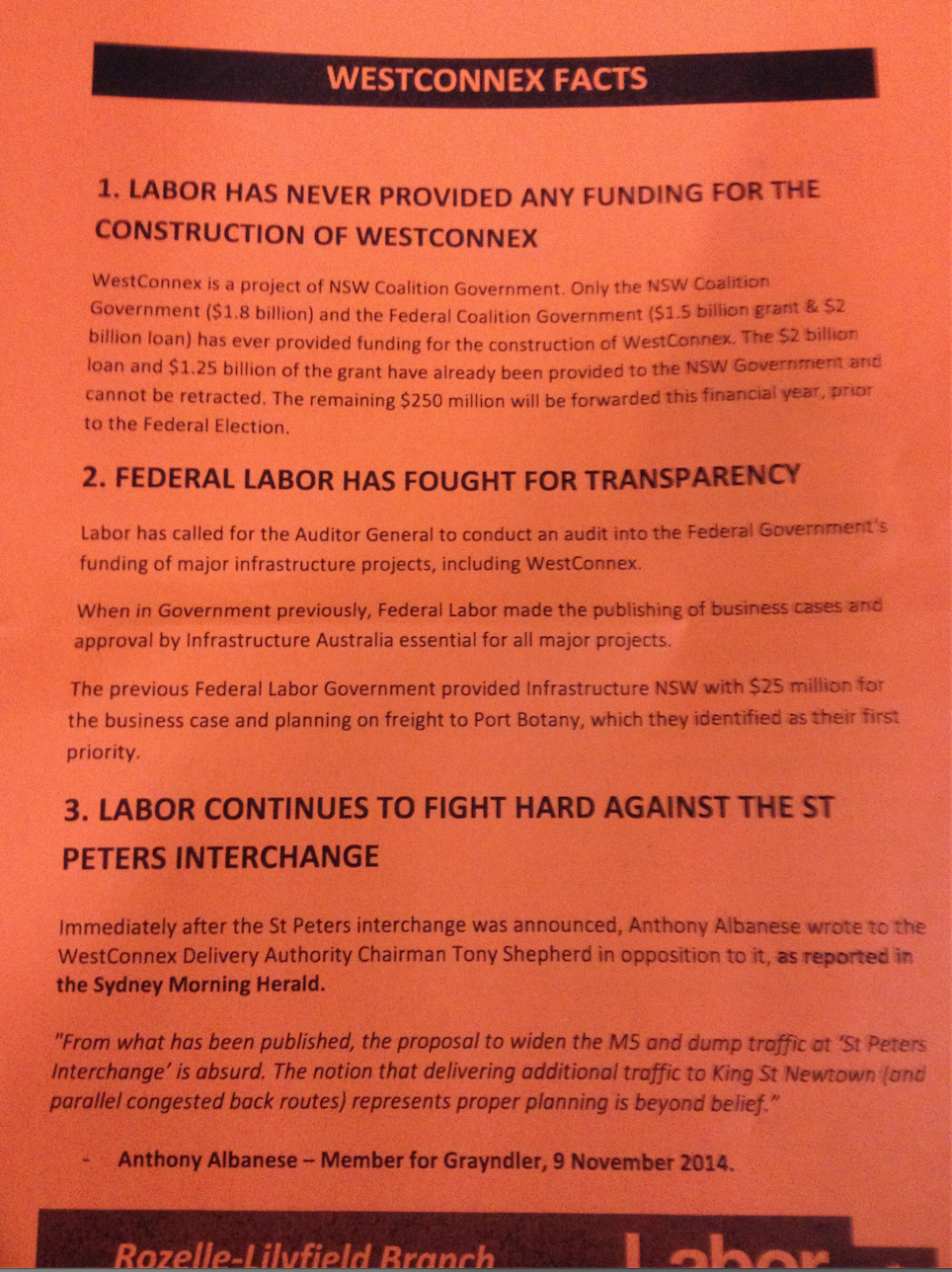 When asked in a press conference on 30 May if Albanese's promise would apply to the Federal funding already promised, Opposition Leader Bill Shorten again claimed incorrectly that the money was gone:

On 9 June, Albanese tried a different tack on FBi Radio when he claimed the loan wasn't "about WestCONnex":

"There's an additional $2 billion that isn't really about WestConnex alone. That's really about the state government's triple-A credit rating. So that's not money that contributes to construction...that loan has been proceeded...the money's been paid."

Can the funding be halted?

Yes, if the Federal government chose to. Premier Mike Baird and his Roads Minister, Duncan Gay, have acknowledged as such:

"If [Labor] want to cancel or not proceed with the [WestCONnex] loan, that creates challenges...threatening to tear up contracts and intergovernmental agreements shows an attitude of putting politics ahead of key infrastructure." Mike Baird, 29 May 2016

"We saw in Victoria...with the contracts signed, that [Labor] pulled out of the East West motorway...Absolutely, it's going to take longer [to build WestCONnex if Federal funding is halted]." Duncan Gay, 30 May 2016

With a Federal audit now underway, halting the funding to protect Australian taxpayers is the prudent thing to do - especially given the catastrophic failure of toll roads like the Cross City Tunnel, Lane Cove Tunnel, Clem7 and Airport Link.

This funding also represents over half of the money raised for WestCONnex so far, as the Baird Government has only sourced $3.3 billion in other funds - $1.8 billion from NSW taxpayers, and $1.5 billion in loans from Commonwealth Bank, National Australia Bank, Westpac and Credit Agricole.

What can you do?

Email your Federal MP and candidates to ask them to halt the funding. We've made it easy for you to do so in 1 minute.

The history of Federal funding for WestCONnex

June 2012: Tony Abbott promises the Coalition will provide $1.5 billion in Federal funding to the M4 East (which later becomes part of WestCONnex) if they win the next Federal election.

March 2013: Julia Gillard announces Labor will commit $1 billion in Federal funding to WestCONnex, with conditions. Labor want the M4 to remain toll free, and for WestCONnex to include direct links to the port and CBD.

May 2013: Labor increases its funding commitment to $1.8 billion.

May 2014: Tony Abbott's first budget includes the $1.5 billion he promised for WestCONnex, plus a $2 billion concessional loan "to accelerate delivery of [the New M5 and St Peters Interchange]".

October 2015: Alex Foulds, a senior official from the same Department, confirms that $750 million in Federal funding has now been paid, and the payment schedule remains unchanged. The $2 billion loan has still not been paid.

November 2015: The NSW Government signs an agreement with the Federal Government for the $2 billion concessional loan.

May 2016: The Federal Budget outlines the payment schedule for the $2 billion loan. Only $38 million of the loan will be paid by 30 June 2016, with the remainder to be paid over the next four years.