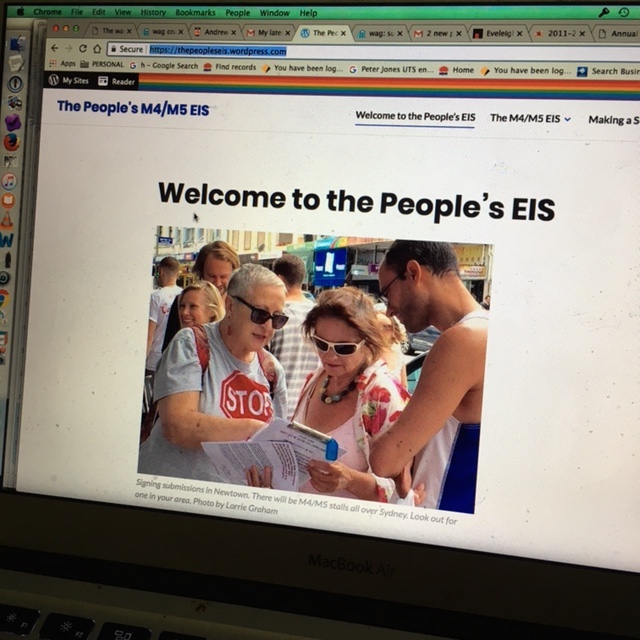 The NSW government is treating the public with contempt. The WestConnex Stage 3 EIS is an impenetrable document that is heavily biased in favour of building WestConnex. CAW’s People’s EIS website aims to put a small amount of control back in the hands of the community by making it easier for residents to download the EIS and enabling users users to search the EIS by area and topic. It publishes sample submissions that will trigger ideas and critical analysis and includes an online submission site on which people can add their own comments.

Like many groups campaigning against the over-development that is wrecking Sydney, the Coalition is concerned by the corrupted planning process. The 14 volumes of the EIS are daunting and full of misleading and incomplete information. Despite its massive size, the actual proposal is ‘indicative only’ with hundreds of uncertainties and risks identified. The EIS repeatedly states that actual decisions about the design and the route are postponed to future construction when the community will have no right to comment.

The Coalition is also encouraging residents to sign hard copy EIS submissions at stalls across the Inner West and in outer Sydney. The Sydney Motorway Corporation (SMC) provides no hard copies to the public and instead has deposited single copies in libraries and Council and MPs’ offices.  Over two months, the SMC is only holding five three-hour public exhibitions at which the public can ask questions of the toll road agency. Many SMC consultants who contributed to the EIS are not available to the public at all. At the EIS sessions, residents are repeatedly told that that they will be protected from impacts while the actual experience of residents currently experiencing dust, horrific noise and traffic congestion on the M4East and New M5 projects is sidestepped as irrelevant. Although it is a huge issue, the inequitable impacts of tolls on Sydney’s residents are glossed over in the Stage 3 EIS.

As we have seen from the New M5 and M4East projects, the SMC is not seriously interested in engaging with the public. We hope that the People’s EIS will encourage people to challenge the secrecy and misinformation that pervades the entire WestConnex planning process.