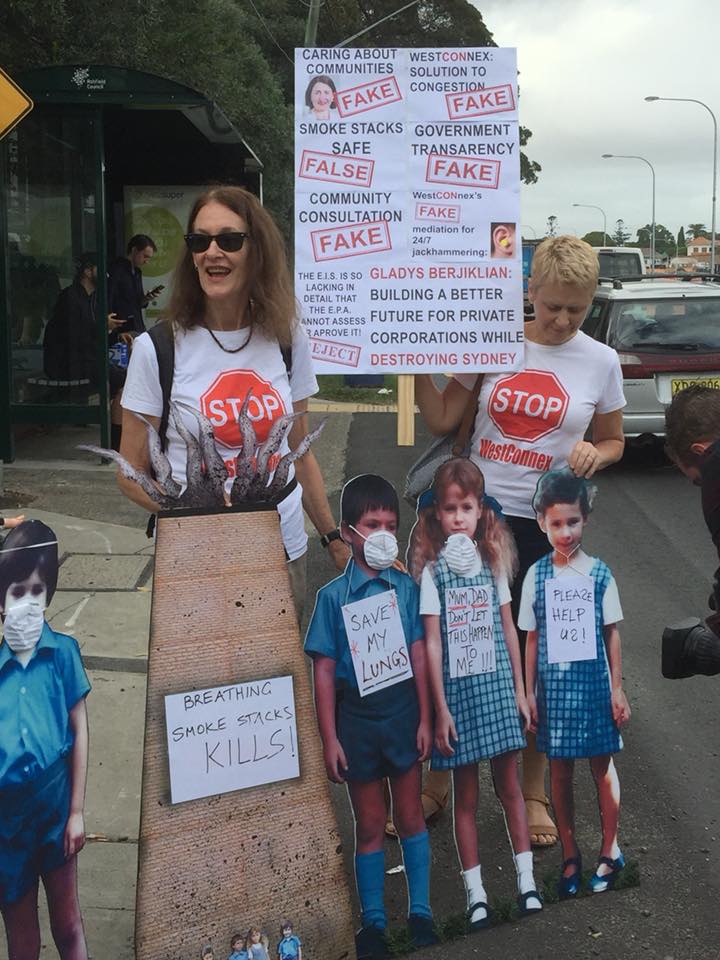 The report, produced by journalist Wendy Bacon and open source specialist Henare Degan, reveals air monitors in Sydney’s Inner West at Haberfield have recorded higher annual levels of PM 2.5 than any other monitors in the Sydney basin – including those located in the coal-mining centre of the Hunter.

PM2.5 refers to atmospheric particulate matter (PM) that has a diameter of less than 2.5 micrometres, which is about 3% the diameter of a human hair. A study published in the Journal of the American Medical Association suggests that long-term exposure to PM 2.5 may lead to plaque deposits in arteries, causing vascular inflammation and a hardening of the arteries that can eventually lead to heart attack and stroke. Scientists in the study estimated that for every 10 micrograms per cubic meter (μg/m3) increase in fine particulate air pollution, there is an associated 4%, 6% and 8% increased risk of all-cause, cardiopulmonary and lung cancer mortality, respectively.

While scientific research has shown there is no safe level of exposure to PM 2.5, in Australia the national 'safe' limit is 8 ug/m3. on a daily average over a year. Analysing a year of data, from January to December 2018, Ramsay Street Haberfield had PM 2.5 levels 46% higher than that with 11.6 ug/m3 recorded. The monitor inside Haberfield School was 40% higher at 11.2, and Powells Creek Strathfield was 22.5% at 10.2.

This chart compares annual average levels of PM 2.5 for 2018 at OEH monitors in the Sydney basin with the levels at WestConnex monitors. Darker blue is Ecotech monitors, lighter blue is OEH monitors. 8 is 8 ug/m3, which is the national limit for annual average PM 2.5. Everything above 8 is a national exceedance. Location names refer to the sites of monitors.

In June 2018, air quality monitors at St Peters public school in Sydney's Inner West recorded the highest average levels of PM 10 – another form of air pollution – than any other Sydney monitoring site during the first three months of that year.

In June 2018, the WestConnex Action Group wrote to the NSW Ministers for Health and Environment raising their concerns about the level of exposure to pollution around the St Peters and Haberfield WestConnex sites. Mark Coure, Parliamentary Secretary for Transport and Infrastructure, wrote back that:

“The Premier knows that’s not true,” said Christina Ho, mother of two primary school-aged children in St Peters. “Yet she is asking me to send my kids into this toxic soup every day, knowing full well how dangerous it is for their health,” said Christina Ho. “Little kids are more vulnerable than any other members of our community and she expects them to study and play in this dangerous level of pollution.”

“Right now it is the communities of Haberfield and St Peters which are most exposed to these high levels of particle pollution,” said Anne Picot, another St Peters resident. “But as WestConnex – with all its unfiltered tunnels - rolls out across Sydney, tens of thousands more will be exposed to it. My question is what are the Premier and the Opposition leader going to do about it? We expect PM 2.5 air pollution will be made worse permanently once the tunnels open with unfiltered exhaust stacks. Why doesn't the Premier care about Sydney's kids?"

The health of the public in exposed localities, particularly children, the elderly and anyone with an existing chronic disease will inevitably be adversely affected. There will be more premature deaths and more chronic disease. Yet, according to medical specialists in respiratory health, it is possible to reduce this health impact if the long road tunnels were fitted with adequate filtration systems. Why won’t the government do this?

The reports can be found at: