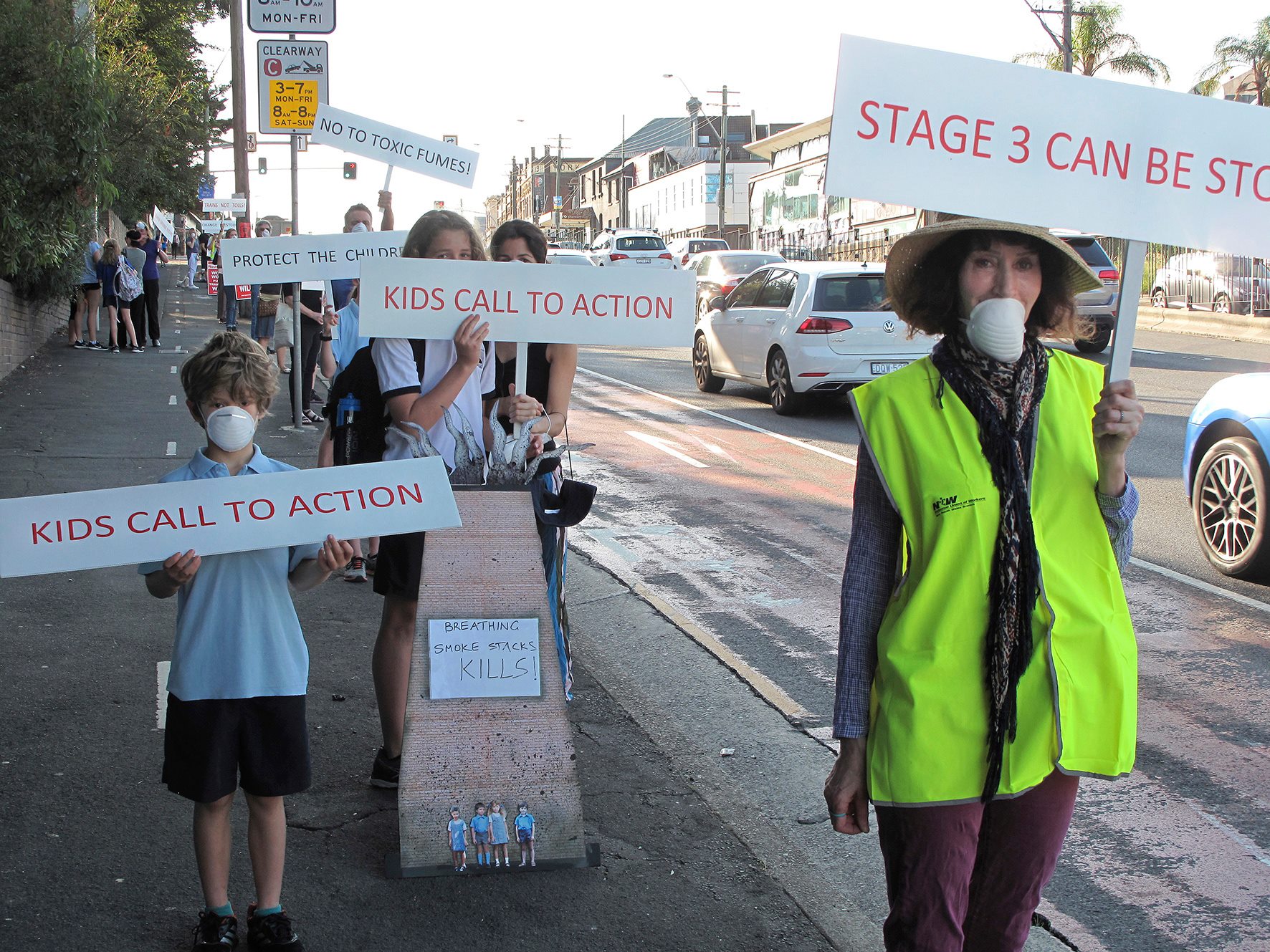 Since its election in 2012, WestConnex has been a great example of how the NSW State government just can’t seem to get its head around planning transport. Poorly justified, poorly planned and critiqued by infrastructure experts, the project is still steaming ahead, driven by the Berejiklian LNP corporate-backed machine, hell bent on getting the 33 kilometre network of tollways sold before the next election, early in 2019.

The public consultation has, by and large, been a sham and not carried out in good faith at all. Community concerns about how public money is spent, about the environment and about the impact on their neighbourhoods have been trivialised. Facts have been obscured and hidden in documents that are 1000s of pages long.

The Environmental Impact Statement (EIS) for the M4-M5 link, was put out to public comment in August last year. It was submitted by NSW Roads and Maritime Services (RMS)  on behalf of the Sydney Motorway Corporation (SMC). It was prepared by global engineering company AECOM that also prepared EIS for the first two stages, has a record of corrupt practices and poor record of traffic modelling.

The link would connect the New M4 at Haberfield with the New M5 Interchange at St Peters through  twin four-lane tunnels - one route to go directly to the Haberfield exit and another to Rozelle where there will be another massive multi-tiered interchange. Also planned, is an underground tunnel from Rozelle to Victoria Road near the Iron Cove Bridge and spur links to a Western Harbour Tunnel, extending well into the Balmain peninsula tollway to the North and the F6 to the South. The M4/M5 tunnels would travel under Newtown, Camperdown, Leichhardt, Annandale, Rozelle and Lilyfield. Many thousands of people would be affected by the construction, particularly those living around mid-point tunnelling sites in Camperdown and Liechhardt.

Where is the Planning Process for Stage 3 up to?

Under the Environmental Planning and Assessment Act, RMS is required to consider and respond to the public and government departments’ comments.

13,000 submissions were submitted from the community, councils and government agencies, including the Environment Protection Authority (EPA) and NSW Health. RMS responses to these were published by the Dept of Planning on Monday the 5th of February.

The public have no right to further comment. However government departments and Councils have until May 5th to respond. A decision is expected around that date. No hearing or merits appeal is allowed.

The response report is submitted by NSW RMS on behalf of the Sydney Motorway Corporation.

WestCONnex Action Group’s (WAG) overall impression is that community and expert concerns have once again been ignored. 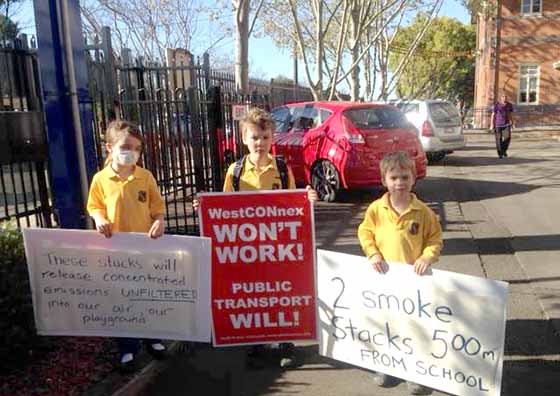 In trawling through RMS' responses and evaluating them, WAG has found many matters of concern regarding air quality. Here are some of them:

Many people are concerned about the impacts on health of living near unfiltered ventilation stacks.

In their EIS submission, NSW Health raised the issue that the reasons behind excluding filtration on the ventilation stacks for the M4-M5 link tunnels, have not been communicated adequately to the public.

The RMS merely notes the concern in their response and points out that filtration is discussed in section 9.2.2 of Appendix I (Technical working paper: Air Quality) of the EIS, and in the responses to community submissions in Chapter C09 (Air quality).

First, referencing a highly technical document is not addressing NSW Health’s criticism as such. RMS’ communications to the public on this matter are not adequately accessible.

The EIS suggests that filtration is ineffective and the air leaving the tunnels is of an acceptable quality. But in reality, it is unclear what the air quality would be like and the impacts it would have. In a study conducted around the Lane Cove tunnel, residents living in close proximity to tunnel ventilation stacks saw an increase in respiratory symptoms following the tunnel’s opening (Cowie et al. 2012).

And in a personal submission against the New M5 EIS, Mark Curran from Residents Against Polluting Stacks (RAPS) wrote:

“Prior to the M5 East stack starting operations I, always the technological optimist, had assured my neighbours that all would be well and that there would be no impact from the stack. I have an ineradicable memory of walking around streets in Undercliffe, close to the stack, soon after the tunnel opened and passing into and out of patches of air which stank of stack emissions.

Almost immediately I started getting reports of people getting ill, of people with controlled asthma reverting to an acute state, of people finding it impossible to tolerate the impacts and putting their houses up for sale.”

WestConnex is currrently constructing or planning to build stacks at Homebush ( M4 East, Kingsgrove (New M5), Arncliffe (New M5), Rozelle (M4/M5), St Peters (one for New M5 and one for M4/M5), and one big double-header stack at Haberfield (M4 East and M4/M5).

The reasons behind this were difficult to explain, but the researchers concluded  that the observations are unlikely to be explained by reporting bias. Their findings “suggest an adverse health effect associated with living in the stack zone.”

So why did residents see an increase in respiratory symptoms ?

The scientists who conducted the work claim that “it is possible that the adverse findings were due to pollutants or size fractions other than those measured.”

In their discussions they claim that measurements of PM10 are probably not adequately reflective of the particulate content of emissions in tunnels and some studies show that PM10 and PM2.5 do not represent Traffic-based Air Pollution (TRAP) as well as other pollutants such as NOx, NO2, black carbon or elemental carbon.

Ultrafine Particles were not measured

Smaller size PM fractions that is, PM1 or PM0.1 (ultrafine particles (UFP)) are of a lower mass and are present in far greater numbers. It has not been possible to measure these. Due to their oxidative potential, larger surface areas and ability to attach to other compounds, they are considered to pose greater toxicity risks than PM10. Furthermore, elevated levels of UFP have been observed inside tunnels, (Cowie et al. 2012).

Their findings imply that there is a need to investigate the emission profile of such stacks and other pollutant sources in the area that might explain the results.

The conclusions of the research are at odds with the stance adopted by the RMS. While they repeat the mantra that the impacts of the stacks will be inconsequential, it feels like the jury is still out on this one.

The NSW Government has just announced that the EPA will be given new powers to test air quality around pollution stacks on current and future projects to ensure they meet consistent standards. But what are consistent standards and will such monitoring be capable of measuring ultrafine particles?  The promise of after the event monitoring without powers to shut down  polluting stacks is just simply not good enough.

In their response, RMS has claimed that a lot of surface road traffic will be diverted into tunnels and the elevated ventilation stacks are a good mechanism to disperse the pollutant from inside the tunnels.

While the RMS are confident that the M4-M5 link will reduce air pollutant levels, Dr Paul Torzillo, Executive Clinical Director of the Royal Prince Alfred Hospital in Sydney and a specialist in respiratory health points out:

“when traffic emerges from tunnels, surprisingly, it has to go somewhere. So it goes back on to roads, and when it goes to those roads, then those roads have higher use, higher traffic, higher pollution levels.”

This does not spell good news for residents in St Peters, Haberfield, Rozelle or Alexandria. Tunnel feeder roads are likely to see increased levels of traffic and pollutants thanks to the WestConnex project. Euston Rd Alexandria is a Westconnex feeder road that even WestConnex's own New M5 EIS found would have 60,000 extra cars a day.

WAG strongly supports NSW Health’s call to reduce community exposure to damaging health effects of traffic pollution.  However NSW Health's use of the term 'feasibility' pits public health against the economic gains some people expect to make through an inefficient and poorly managed road project. There are plenty of residents and communities across Sydney for whom WestConnex has not been feasible. It has not been feasible for the thousands of people who are enduring years of noisy construction work, for those whose neighbourhoods have been torn apart and for those who lost their homes. It is not feasible for commuters in Western Sydney who have to foot the bill for the project through tolls. And it certainly is not feasible for community members who are likely to see their health deteriorate should WestConnex get up and running.

Who will be affected by PM2.5?

Figure 1. Sensitive “community receptors” which will witness an increase in PM 2.5 levels as a result of the M4-M5 link, Stage 3 of the WestConnex project.

( Note: This map only provides information about 'community receptors' that will have higher levels of PM 2.5 for Stage 3. Other schools and community centres are negatively affected by Stages 1 and 2)

PM2.5, is a particulate matter with a median diameter of less than 2.5 microns, approximately one thirtieth the width of average human hair. It is often produced through combustion of fossil fuels from vehicle exhausts (UNICEF 2016, pp 20). Because of its small size it can penetrate into the bloodstream and lungs and cause health problems such as heart disease and cardiovascular problems (UNICEF 2016, pp 20). WHO’s specialized cancer agency, the International Agency for Research on Cancer, classIfied PM2.5 as carcinogenic to human beings in 2013 (IARC 2013). 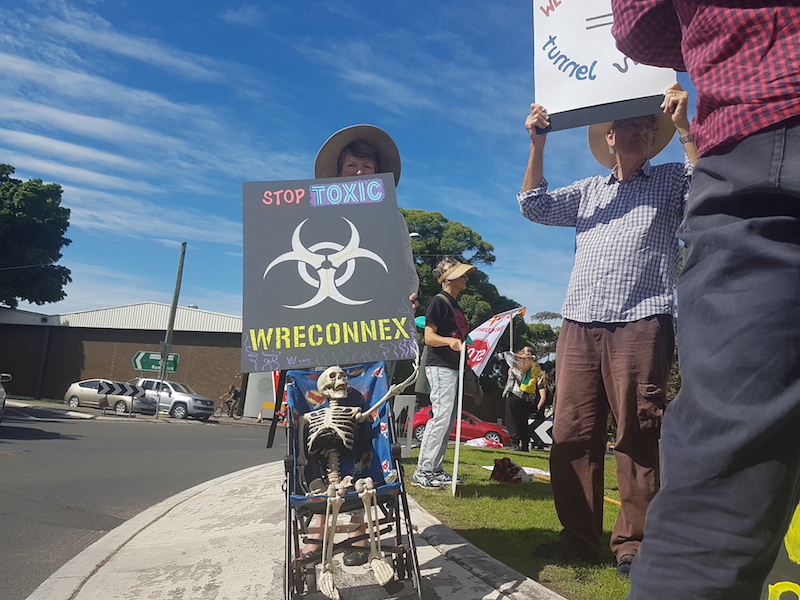 While the RMS have included the ventilation outlet and surface road contributions for air toxic pollutants in its impact assessment of the worst case scenario, they do not appear to have made an assessment for other air pollutants such as CO, PM2.5 and PM10.

Air toxics are a diverse group of pollutants which include volatile and semi-volatile organic compounds, heavy metals and others. They are present “in ambient air in relatively low concentrations but have characteristics such as toxicity or persistence that make them a hazard to human, plant or animal health” (Department of the Environment and Heritage, 2005). Examples considered in the EIS include  benzene, formaldehyde and 1,3-butadiene. This set of pollutants is categorised differently to criteria pollutants like NO2, CO and PM2.5 .

For the latter set of pollutants in the case of CO, PM2.5 and PM10 only the contributions of the ventilation outlets are provided for the regulatory worst case scenario. Instead of recording the total concentration of the pollutant at a given receptor, the EIS suspiciously provides assurances that “exceedances of the criteria due to the ventilation outlets alone would still be unlikely” , see Appendix I Technical working paper: Air quality Vol 2C (Part B). Here the criteria are a reference to the NSW impact assessment criteria.

The worst case scenario, that was assessed in the EIS represents the theoretical maximum changes in air quality for all potential traffic operations in the tunnel e.g. unconstrained and worst case traffic conditions from an emissions perspective, as well as vehicle breakdown situations. For the worst case scenarios, the emissions concentration from the ventilation outlets were assumed to be at the regulatory limits, see EIS M4-M5 Link Appendix I Vol. 2C (Part A). But it is unclear what these regulatory limits are exactly.

From the point of view of WAG and others concerned about people living near the stacks, the relevant measurement would seem to be the level of the background emissions, plus the surface road emissions created by the project plus the ventilation stacks emissions. It is only when that figure is calculated that we can know whether the prediction exceeds recommended levels or not.