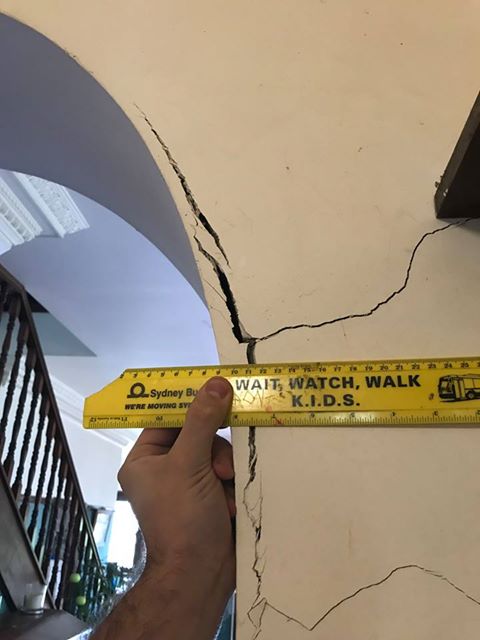 A Damage Register<http://www.westconnex.info/r?u=Zji5wTc4UOz0SdAAAJFPd7tEHOOUvaoDSG9IT5mURFIVG1l6RwbRVsvQa_Y9VFwzvUuBNm6bbMXfrSMtXz9mVQ&e=49ffd49cfce46e76281623334873e201&utm_source=nowpt&utm_medium=email&utm_campaign=mr_damage_register&n=2> has been created by the WestConnex Action Group to begin logging the extent of damage done to homes along the route of the controversial private tollway. The register will plot the damage in relation to the rollout of the tollway, and begin to build the documentation necessary for a potential class action against a number of parties.

Reports of cracking and damage to homes  began to emerge in November 2015. At that time the insurance companies refused to pay for repairs as they argued it was as a result of the WestConnex project. Nearly four years later and just four weeks after the release of the Parliamentary Inquiry into WestConnex that described the project’s accountability as “…the worst example of a lack of transparency,” some residents have been told their homes are cracking because of “rusty gutters and leaking downpipes” not tunnelling.  Other residents have been told the cracking is due to “the dry weather”.

Residents on Carrington Street in North Strathfield have revealed construction vibrations from work on the M4 East tunnel section of the $16.8 billion motorway project was causing their walls to crack, a claim they had also made to the Parliamentary Inquiry in December 2018.

WestConnex contractors and the RMS have denied liability for the damage, claiming the cracking is not caused by WestConnex construction. As result residents are forced to pay thousands for private surveys and legal representation, while the RMS have refused to provide residents with the Geo-tech surveys needed to prove this.

The home of Beverly Hills resident, Kathryn Calman is likely to cost more than $200,000 to repair. Last week the media widely covered similar serious cracking damage to homes of residents above the M4 East tunnel in Strathfield.

“The assurances from RMS and the Minister for WestConnex, Stuart Ayres, are not worth the paper they’re written on,” said Kathryn Calman. “Residents get an immediate denial of damage while dodgy dilapidation reports are issued claiming the drought as causation.

“Then to add insult to injury residents are taunted by WestConnex to ‘prove it’, but are denied access to geotechnical, vibration and design plans our engineers need. Most of my home is now cracking,” she concluded.

NSW opposition published a dissenting report in the WestConnex Inquiry that included the following:

“WestConnex is costing taxpayers more and delivering less. Construction too often has skirted planning conditions supposed to protect surrounding neighbourhoods. The State has been too insensitive to the trauma inflicted on families who lost their homes in the compulsory acquisition stages. The development of the original business cases would not pass muster today under the Government’s own policies. The Government (clearly) has lost the community’s confidence about air standards. The report is critical of the NSW Government’s failings in these spheres; and it’s right to be.”

However it is unclear whether the election of a Labor State government would see any material difference for the lives of residents confronting this project.

“We need an incoming Labor government to do three things,” said Kathryn Calman. “Introduce transparency to this grim tollway by making all relevant reports - geotechnical, vibration and design plans and air quality results - publicly available in real time and ensure independent assessment of the cause and the damage are used across the entire project. Secondly, levy the contractors to ensure funds are available to compensate and repair the damage done to homes. Thirdly, establish a Royal Commission to examine how the people of NSW had a $20 billion private tollway foisted on the community without so much as a business case to justify it in the first instance.”

Under the Conditions of Approval for each WestConnex Stage, Roads and Maritime Services (RMS) is required to rectify at its expense any damage resulting from construction. However, in its contractual arrangements with Sydney Motorway Corporation (SMC), RMS has “contracted out” this obligation to SMC, which in turn has devolved responsibility for damage to the construction consortia for each Stage in the construction contracts. This means the Government has set up a system under which the party that has caused the damage has the power to assess whether or not the damage is caused by WestConnex construction, a clear conflict of interests.

Further, damage to homes can take years to become apparent, even cracks which may be minor today can develop into serious damage once the soil and groundwater have settled and roads and tunnels become operational. It is even less likely that the construction contractors will accept responsibility in years to come, and may even have been wound up by then.

The Government has recognised this as a problem and in the Approval Conditions for Stage 3, the M4-M5 Link, has added additional provisions requiring an independent assessment process for damage claims. However, it has not applied these to the earlier WestConnex Stages, or forced those contractors to remedy damage, leaving the residents there high and dry.