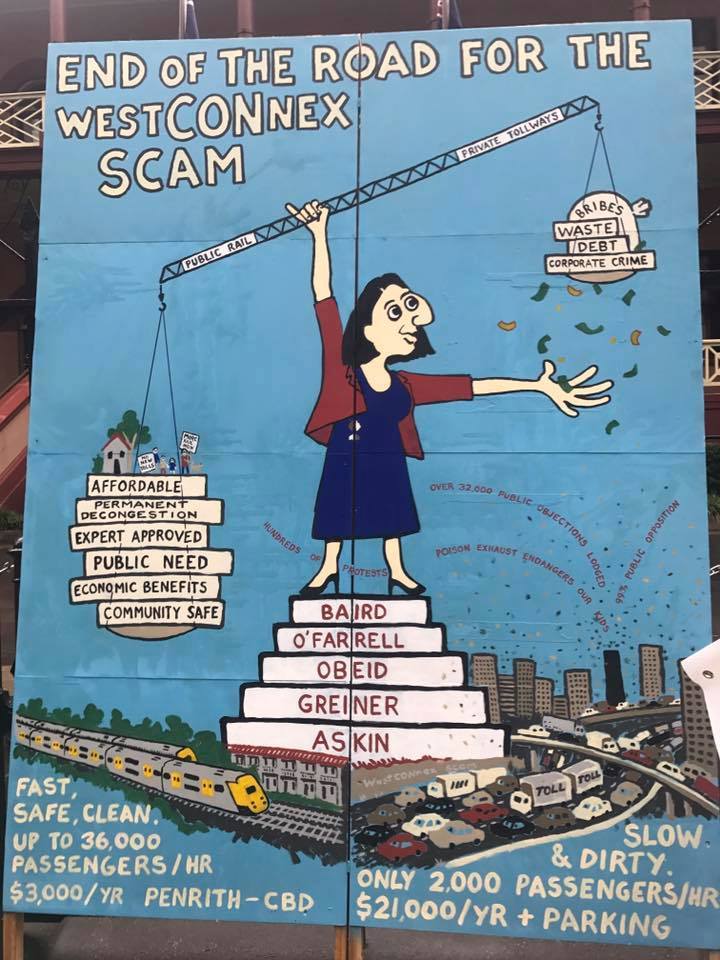 WAG’s call follows a Sydney Morning Herald report based on leaked business case for the F6 tollway which revealed a 130% revenue threshold to be reached before any share of toll revenue would return to Government coffers. Instead the benefit will flow to whichever consortium buys the 51% share of WestConnex.

“This latest leak clearly shows that the Government is desperate to make the early sale of WestConnex, before any of the Stages have been completed, attractive to private investors, and is yet another example of the total lack of transparency surrounding the project,” said WAG spokesperson Anne Picot.

“We call for the Government to halt the sale and disclose the complete business cases for the WestConnex, F6, Western Harbour Link and Sydney Gateway. This latest revelation supports what we have always said, that the WestConnex tollway system is an investor opportunity for private interests and not a transport solution, ”

“It’s outrageous that this information would have been remained secret from the public if it had not been leaked. Yet it is the public that will carry massive costs for decades.”

"We’re not surprised to learn that the F6 extension revenue would be sacrificed to the private owners of Westconnex. WAG always suspected the F6 was rushed into the priority projects list to boost the numbers of vehicles using the WestConnex stage 3 M4-M5 link," said Picot.

"This is all part of sweetening the Sydney Motorway Corporation deal. The government is terrified they cannot sell 51% of the SMC without massive giveaways to the private owners. It makes clear what a dodgy proposition the WestConnex project is, if they have to build more tollways to send traffic onto the WestConnex to make the project profitable for the private investors."

“The Environmental Impact Statement showed how weak the case was for the Stage 3 M4/M5 link. There is real doubt now whether the planned underground Rozelle interchange can even be built, at least not without massive additional cost to the taxpayer.  It’s  obvious that the traffic projections for the link tunnels were unrealistic and the revenue forecasts unlikely to meet investors' expectations.”

"The F6 trade-off is just part of what the desperate Berejiklian government is using to push the sale through. It's already known that at $9 billion the F6 will cost massively more than the rail upgrade to Wollongong. But this government is wedded to privatisation at the expense of public transport, regardless of what the public wants or needs," said Picot.