WestCONnex Action Group today condemned NSW Planning’s announcement that it will prematurely release the Environmental Impact Statement (EIS) for the M4-M5 Link of the WestCONnex tollway system this Friday, 18 August.

Community feedback on the Concept Design for Stage 3 was only completed just over two weeks ago and the Sydney Motorway Corporation has not yet released its report on the feedback received.

“SMC couldn’t possibly have properly considered more than 2 months of feedback on the Concept Design in just 2 weeks. This echoes the shambolic process with the Stage 2 EIS, which which has left residents living with uacceptable impacts. It’s clear that SMC and the Berejiklian Govt have no intention of actually listening to the community,” said spokeswoman for WestCONnex Action Group, Rhea Liebmann.

Further, there was apparently confusion in the Department of Planning itself about when this critical EIS document is to be released. Yesterday the Department published an advertisement in the Inner West Courier stating that the exhibition of the EIS would begin today (16 August) for two months, and listed offices and libraries where hard copies of the EIS could be obtained. In fact, no copies of the EIS are yet available.

“Despite the universal condemnation of the EIS community feedback processes for Stages 1 and 2 of WestConnex, there has been no improvement for Stage 3. This project is being rammed through before the true cost and impact of this non-solution becomes even clearer.  However, Sydney residents are waking up to the cost of tolls and the terrible health and social impacts on communities of the first two stages.” said WAG spokesperson Janet Dandy Ward.

“The Berejiklian Government today also announced the proposed sale of 51% of WestCONnex. It’s obvious that proper planning processses are being subverted by the desperate need to sell WestCONnex before the next State election. These contracts will be hidden from the NSW public but will bind them to exorbitant tolls for decades.”.

WestCONnex Action Group demands that the EIS assessment process be halted until the community feedback report on the Concept Design is released and that the consultation period for the critical EIS be at least 90 days to allow the community proper opportunity to understand and comment on the plans. 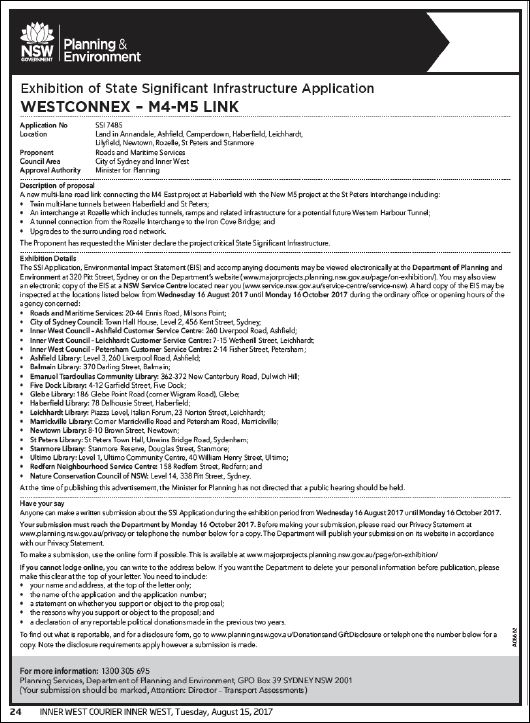