Flashback: Pauline Lockie on WestCONnex at the March Against Baird

Last week saw Mike Baird step aside as Premier of NSW, with many citing his failure to listen to communities devastated by WestCONnex as one of the key reasons for his demise. Back in May 2016, when Baird's popularity was starting to plummet, WestCONnex Action Group's Pauline Lockie spoke at the massive March Against Baird rally about why WestCONnex was just one more way for Baird to achieve his ultimate goal: to sell us out to his mates in big business. 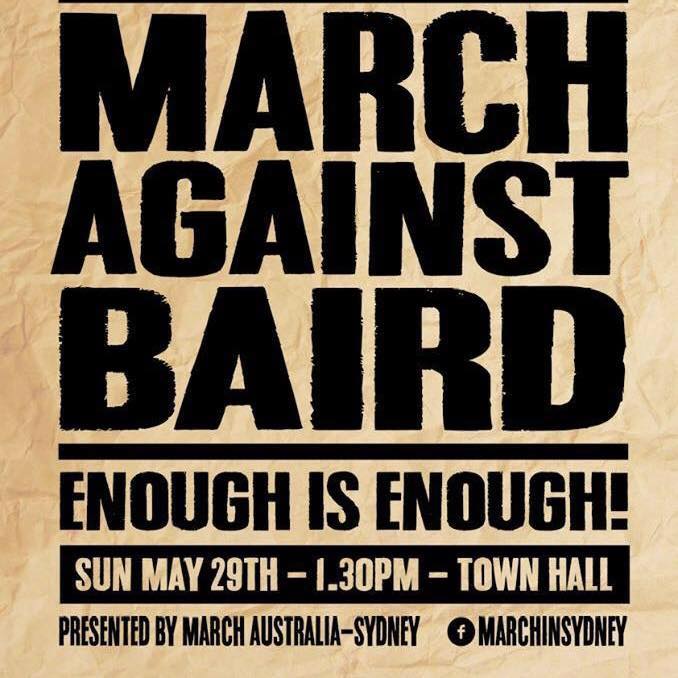 The $16.8 billion WestCONnex tollway is one of the biggest infrastructure projects in the southern hemisphere, and it’s being funded by us, through our tolls and taxes.

If it’s built, WestCONnex will wipe out endangered species, parks, thousands of old-growth trees, and hundreds of homes and businesses from Parramatta through to Haberfield, Rozelle, Camperdown, St Peters, and down to Beverly Hills in the south west.

It will see tens of thousands of men, women and children exposed to increased pollution from unfiltered stacks and feeder roads, and see families in western Sydney paying huge tolls to drive straight into traffic jams.

All this, when even the government’s own figures show WestCONnex will make traffic worse, not better, on many of the roads it’s supposed to fix.

It’s part of a deliberate strategy by Mike Baird and his government to do everything they can to shut down transparency around WestCONnex, so they can try and bulldoze as much of it through our city as possible before people realise the truth: that WestCONnex is a scam.

And just like all the other Baird Govt scams you’ll hear about today – the destruction of local democracy, the lockout and protest laws, the way communities across NSW are being laid to waste for coal and gas mining – WestCONnex is just one more way for Baird to achieve his ultimate goal: to sell us out to his mates in big business.

All of us, but especially people in western Sydney, where much of my family live, are being fed the lie that WestCONnex is being built to bust congestion.

And we know this is a lie, because the world is littered with examples of big roads that have failed time and time again to ease congestion, and instead made traffic worse.

Think of Los Angeles: if building massive freeways really was the solution to congestion, LA would be traffic heaven. Instead, it’s infamous for its traffic hell.

And the proof that building big roads doesn’t solve congestion can be seen in the design of WestCONnex itself. For a price tag of $16.8 billion – over half a billion dollars a kilometre – we get a road that mostly just duplicates failed roads we already have, like the M4, the M5 East, Parramatta Rd, and City West Link. These roads were once supposed to be the solution to other congested roads, but instead they made traffic even worse.

And of course, motorways like WestCONnex cause other huge problems – pollution, diseases, climate change, destruction, lost opportunities, loss of city centres; the list goes on.

It’s for this reason that there aren’t many cities in the world that still have people like Mike Baird and Duncan Gay insisting that building massive motorways that rip through their city centres is “progress”. In fact, many cities – including Paris, New York, San Francisco, Seoul and many more – are tearing down their freeways instead of building new ones.

And that’s because they’re finding that this doesn’t just return huge amounts of former road space back to people instead of cars. What they’re funding is that getting rid of these roads actually reduces traffic as people find other ways to get around.

So why is that happening in those cities, while here in Sydney, our leaders at state and Federal level are determined to cling to an outdated disaster like WestCONnex?

And the answer, again, goes back to this: Mike Baird isn’t governing for people like you and me. He’s here to line the pockets of big business.

Which is why these big business actually took over the planning process for WestCONnex from the very beginning. 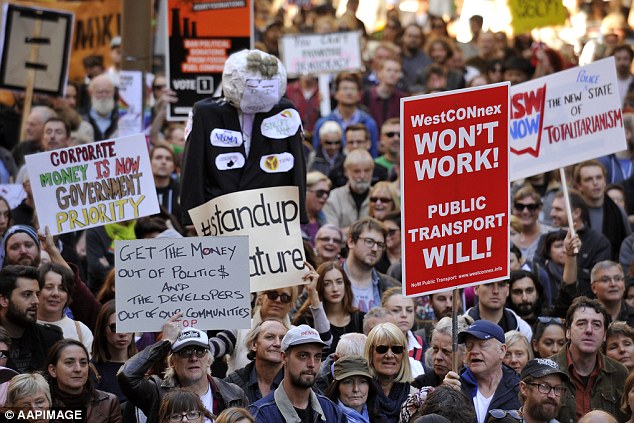 Back in 2012 and 2013, when WestCONnex was first floated, the tollway industry was in crisis. Roads such as the Cross City and Lane Cove Tunnels had either gone broke or were getting there fast. Two of the companies that were heavily involved in these failures were Leightons and AECOM, which have since been sued for providing misleading and inflated traffic figures. Macquarie Bank was also involved in failed tollways.

Despite this, in 2013 the NSW government chose these companies to be closely involved in planning and justifying the WestCONnex project.

Of course, they all had a huge interest in WestCONnex going ahead, because if it did, that would mean even juicier contracts would be coming their way.

Needless to say, they said WestCONnex was a great idea. And now Leightons has won billion-dollar contracts to build it, even as it stands accused of major corruption overseas; AECOM has picked up millions of dollars’ worth of WestCONnex contracts; and Macquarie has a financing contract until 2070; and these, along with hundreds of other contracts, were signed before any planning approvals were granted.

But here’s the thing. Because so many toll roads have gone bust, no private company or investor is willing to put its own money on the table to build WestCONnex.

That’s why the toll road lobby, along with former treasurer and now Premier Mike Baird, came up with a brand new funding model for WestCONnex: to use our money – our taxes, and soon, our tolls – to pay for it, so we’re the ones who carry all the risk.

And here’s the real kicker: once we’ve done this, WestCONnex will be sold off to a toll road company like Transurban. That’s why the tolls to drive on WestCONnex will be so high – up to $11 each way, which will go up by around twice the inflation rate every single year – and why any company that buys WestCONnex will be able to keep charging these tolls until at least 2060. It’s all to sweeten the deal at our expense.

And if WestCONnex is as much of a financial disaster as experts are saying it will be, it’ll probably still be sold off – but at a massive loss to us. The private sector, of course, will keep reaping the profits for decades to come.

This is why WestCONnex is seeing an unprecedented flow of public money into private hands. And it’s being done in the most secretive way possible, because the Baird Govt has refused to release the full business case. It’s even privatised the govt authority responsible for building WestCONnex to make it immune from freedom of information requests and completely unaccountable to the public. 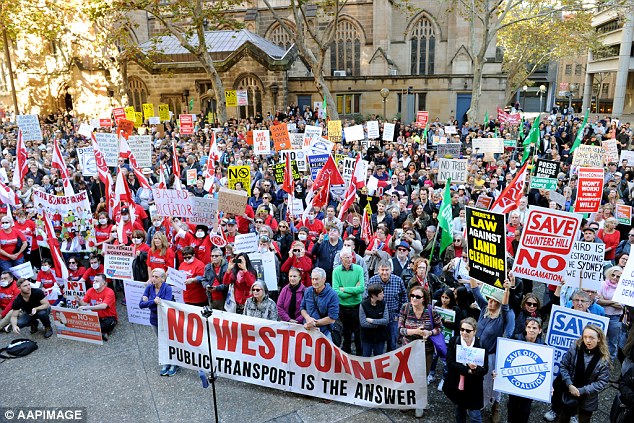 But while the Baird govt is doing its best to try and keep the truth hidden, communities across Sydney are fighting back. And we are breaking through.

People have flooded the NSW Planning department with a record-breaking number of objections to WestCONnex.

Acts of civil disobedience have been erupting across the route, with ordinary residents occupying drill sites and forcibly acquired homes, and blockading construction sites to stop works going ahead.

Thousands and thousands of people have filled halls at public meetings, signed petitions, and spread the word via mainstream and social media that WestCONnex is a scam, and we all deserve better.

Now the Federal auditor-general has announced an investigation into the Abbott/Turnbull govts’ decision to commit $3.5 billion of Federal money to WestCONnex.

And with over $2 billion of that money still yet to come across, we have a huge opportunity to rip a massive hole in the Baird Govt’s budget for WestCONnex by demanding this money be halted; which is why I’d love it if you would contact your Federal MPs and candidates to tell them you won’t vote for them in this election unless they put a halt to this funding.

Because there is so much more we could do with $16.8 billion than building 33km of tar. We could invest in better public transport. Better cycling and walking facilities. Creating jobs and vibrant centres in our west and across NSW. And we’d have money left over for our schools and hospitals.

It’s not too late to stop WestCONnex and start moving towards a better vision for our city. But there’s no time to waste. Because if we don’t stop WestCONnex, we won’t just end up with white elephant of a tollway.

If the Baird government gets away with all this, it’ll become the way everything’s done in NSW – with no transparency, no accountability, no consultation, and no benefit for anyone except the companies grabbing billions of our money.

So don’t wait for the WestCONnex tunnel or the tolls to come to you. Join us and help us keep taking action against this destructive tollway – because together, we can stop WestCONnex.