Wendy Bacon went along to one of WestCONnex's M4-M5 Link "community ideas" sessions - part of its much-vaunted new approach to community consultation - on Thursday 18 August. She explained why nothing has changed when it comes to the Utopia-style misinformation, secrecy and lack of transparency around Mike Baird's pet project.

If you decided to head home rather than going to the WestCONnex consultation session at Rydge's Motel near RPA tonight, you made a good choice. International tourists arriving at the motel were greeted with this sign, courtesy of WestCONnex Action Group's (WAG) John Bartholomew. 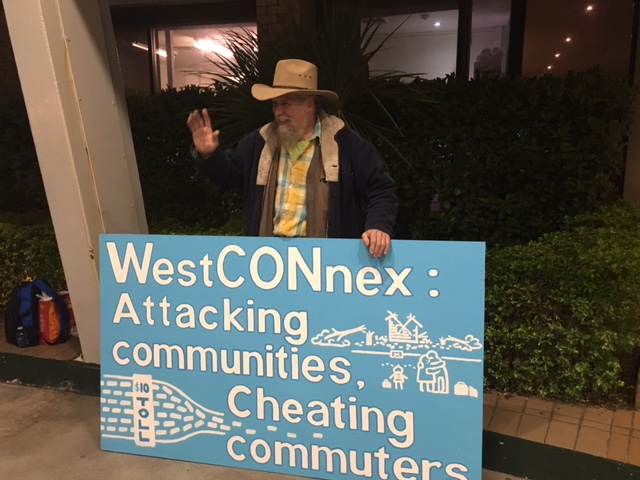 Those of us there for the WestCONnex session were ushered towards a table staffed by two people from an agency called POLITE. They gave us post it notes that we could stick on maps to tell them what we thought.

There were community engagement people, environmental planners, an engineer, and the same RMS staffer we've seen at previous "consultations" spruiking his usual line that there will be no air quality problems.

Despite this, there was no more information available than is available on the very broad-brush maps. Just a lot of people being paid by taxpayers to tell us that there was nothing else known than what was on the map. For more information, we will have to wait for the reference design that will be released earlier in the year. From our past experience, at that stage, all the bad news will be a fait accompli.

This will be the only session anywhere near Newtown, and indeed most of King St - let alone Alexandria - was missing altogether from some maps.

Mike Baird has recently said the consultation process would be better with the M4-M5 Link. We asked the staff there why. We were told that this time there is a new step. This step is the step where they tell you nothing but tell you they will tell you more later. You get to say what you like.

We asked what would happen if nearly everyone rejects the project as happened with the M4 East and The New M5. Indeed the post-its we saw with "community ideas" included ideas we know WestCONnex has ignored on those stages. We were told simply that it is a "government project". That at least was honest.

The community engagement woman who was there lives in the Newtown area. She told us she supported the project because it would get traffic off roads. This old Westconnex line left us wondering if she had engaged with her own community lately.

Overall we found that there was even less information and preparedness to engage than at earlier sessions for the M4 East and New M5. I couldn't even find out who was doing the environmental impact statement (EIS).

The whole exercise was about "selling" WestCONnex - getting a few messages down on little bits of paper they could later say they had taken account of in their design.

We left wondering: are the people who work for WestCONnex deliberately lying? Or are they deliberately keeping themselves in a state of ignorance?