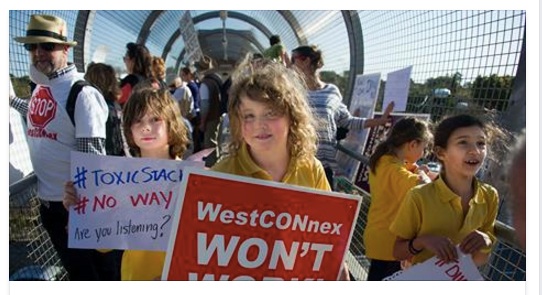 In its response to the EIS, the EPA, in very strong terms, reminded the RMS that an Environmental Protection License will not include provisions for out of hours construction work without a strong justification.

The response from RMS does not give rise to any confidence that this matter is being taken seriously. They state that the timely construction and delivery of the project is an essential part of the NSW Government’s multifaceted approach to planning for future growth in Sydney. (Given the outrage across the city at so many of the NSW government’s incompetent attempts at urban planning, it is a scary prospect to think what the future growth of Sydney entails exactly). The rest of the RMS response simply describes the activities that will be conducted out of hours and offers reassurance they will provide a clear justification and a robust protocol to manage such work.

What out of hours construction means for residents

Given RMS poor track record on noise management throughout the course of the WestConnex project so far, and the condescending way in which they have treated residents in St Peters and Haberfield, we have no faith in their implied good intentions or their competence.

In the EIS's discussion of the construction works on the Darley Road site in Leichhardt, it is noted that at various points during the project, hundreds of homes will face noise levels that can cause sleep deprivation. While this appears to be for ‘short’ duration, as in weeks or months at a time, the area will be subject to over 4 years of construction work (See Table 1).  Also, some residences will face significant noise disturbance from tunneling support works for close on 2 years, during the day and night (M4-M5 EIS Vol 2D App J Noise and vibration part 1.pdf)

In Rozelle, pavement modification work is scheduled to last 9 months in areas adjacent to the Rozelle Crescent Civil site.  This may cause 302 residential receivers to face some sleepless nights with sleep disturbance criterion being breached.  (M4-M5 EIS Vol 2D App J Noise and vibration part 9).

Around the Iron Cove Bridge sites, over 200 residential receivers will face noise levels that are above the sleep disturbance criteria.This could last for up to 2 years, although the time for which any one receiver will be affected is substantially less.

In total, six Sydney suburbs will have civil and tunnel construction sites, and in Rozelle and Haberfield, there will be multiple sites. See Figure 1 for an indication of where these are located.

Sleep deprivation is a serious health concern in areas where there will be nighttime construction work.

Studies on the relationship between noise and sleep deprivation have recorded impaired mood, subjectively and objectively increased daytime sleepiness, and impaired cognitive performance amongst the short-term effects of noise-induced sleep disturbance.  And epidemiological work on night time noise exposure levels indicates that it may be more significant for longer-term health outcomes than daytime levels (Jarup et al. 2008).

The EPA’s submission notes that the fact that there are two construction options A and B in Haberfield which means that the construction and design are not finalised and so and the noise and vibration mitigation described is ONLY conceptual. It states that there is a need for further review of mitigation once a contractor has been appointed. In its response, the RMS merely reaffirm what many residents already know in its response: that the construction methodologies are indicative only. In other words ,the RMS and the Sydney Motorway Corporation do not accept EPA's view that there should be further review.

Can we trust an EIS that is “indicative” only?

The fact that the construction methodologies are indicative only raises questions about how seriously the EIS should be taken, and what degree of change we can expect when the design is finalised.

The RMS and Sydney Motorway Corporation, in their defence, claim that the construction methodology presented by the contractor(s) will be consistent with the environmental outcomes and management measures described in the EIS, and the conditions of approval for the project. But the M4 and new M5 construction work on numerous occasions has not followed EPA regulations or Planning approval conditions, and there were modification requests put in to allow RMS contractors to deviate from NSW Department of Planning’s conditions of approval. Under NSW Critical Infrastructure provisions, the public has no input into these applications for modifcations, which are just signed off by Planning behind closed doors.

In the light of experience with earlier Stages, the community simply cannot trust that RMS’  future mitigation strategies will be adequate after the design is refined by a contractor. For example, a year after demolition and construction work began only metres from their homes in St Peters, residents still have not received noise mitigation. Some were downgraded from a higher level of noise mitigation to a lower level. They have been told that the work will happen in the next few months, but only after Independent Councillor Pauline Lockie raised the issue with NSW Planning.

Where does this leave residents of Haberfield and Ashfield?

By the end of this year, residents and students studying close to construction sites will have already suffered three years of dust, noise and heavy diesel trucks in their streets. There are currently at least four major construction sites in Haberfield  Residents living in apartments in Ashfield had all vegetation and buildings between them and Parramatta Road stripped away before the M4 East construction began in 2016. Residents were told at that time that there would be no construction above ground for Stage 3.

Residents in St Peters have already experienced nearly eighteen months of drilling, demolition, destruction of trees and unbearable odours and night noise. If construction is approved, residents will experience the impacts of construction sites until the end of 2022. Aside from a few nights alternative accommodation for a few residents, there has still been no noise mitigation for some of the most affected residents. In all, this amounts to six years of construction - is NSW Planning seriously going to approve the RMS's claim that this is 'temporary'?

Construction impacts have not been temporary during the M4 East and New M5 construction. Residents have often had their complaints about excessive noise ignored. This means that residents can have little confidence in vague promises of mitigation. The Response to submissions report fails to respond to the residents' concerns and sidesteps the EPA's call for more certainty about both impacts and mitigations measures. The Stage 3 EIS must not be approved by NSW Planning.