Peak-hour queues from the Wattle Street/Parramatta Road intersection are expected to reach back into the WestConnex tunnels, and could even reach the WestConnex mainline by 2033, according to the peer review.

At Rozelle, soon after the project opens, the peak-hour queues  are expected to extend back across the Anzac Bridge and into the Rozelle Interchange, with knock-on effects to traffic on the City West Link, Victoria Road, the Stage 3 M4-M5 link and the Sydney CBD. 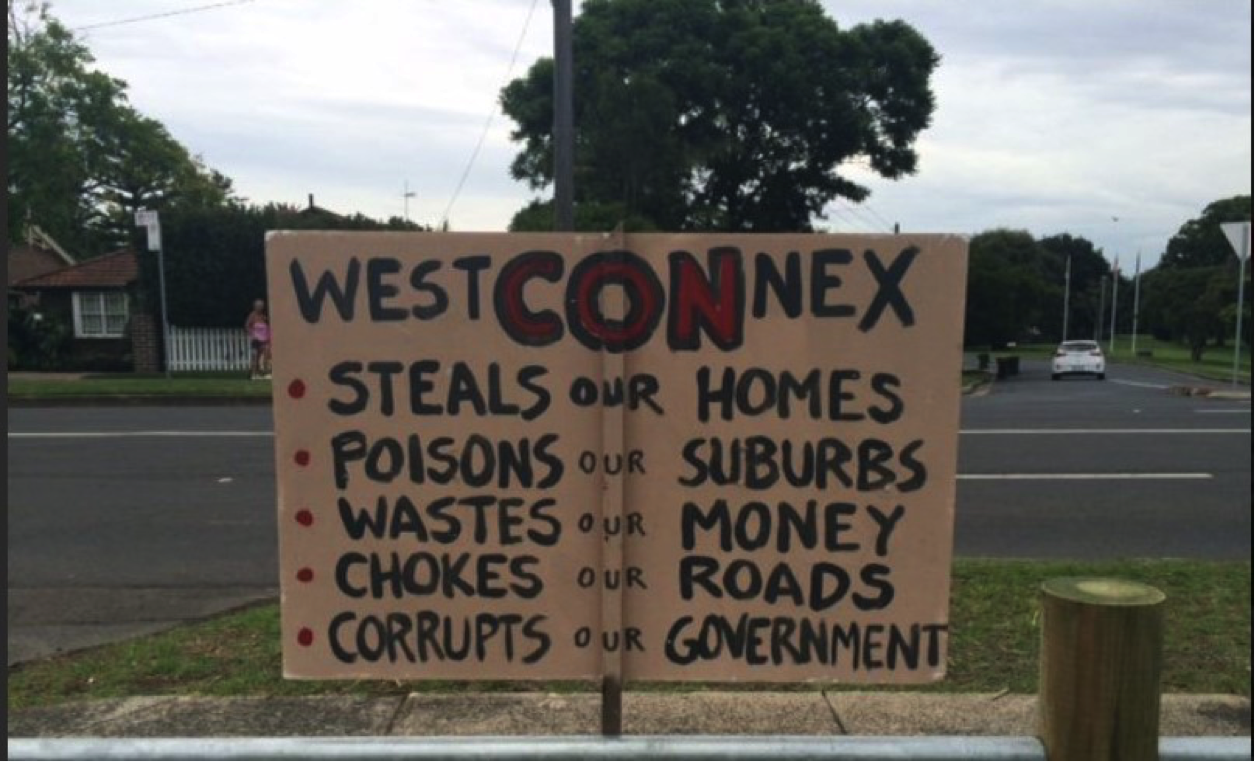 In St Peters, by 2033, the network will be “so heavily saturated by traffic that it  is very difficult to draw any firm conclusions regarding the relative impacts and benefits of the project in this area”, the peer review states.

In other words, traffic will be moving at snail’s pace, constantly, and WestConnex will make it worse, not better – especially in the evening peak hour.

The review also points out that the only St Peters traffic management measures proposed by the Stage 3 EIS rely on the construction of the (mythical?) Sydney Gateway link to the airport, for which as yet there is no land available. No alternatives have been offered.

The peer review of air quality around the WestConnex project basically concludes that in some areas surface air quality will be slightly improved, and in others it will be slightly worse. However, that conclusion relies on there being improved traffic flows and vehicles spending less time idling. As detailed above, that’s not a given with WestConnex.

The Department of Planning takes a cavalier approach to the neighbourhoods and places where air quality will be worse. Its assessment report reads, “The health risk associated with these increases is predicted to be acceptable.”

The peer review is less forgiving when it comes to how the EIS proposes assessing air quality. It says the EIS needs to focus more on assessing local air quality, rather than relying on a larger meteorological overview:

“... it is not clear why modelling tens of thousands of generally distant, little affected locations is a key feature of the assessment approach.

“The representation of apartments, offices (etc.) as a single receptor point increases uncertainty in the assessment as it has potential to underestimate the affected population and the pollutant impact.This is because many receptor points were selected in the centre of an apartment block or complex, rather than at the edge nearest the main road.”

It recommends that WestConnex instead collect “key pollution concentration data at key roadside and background locations (i.e. locations nearby, but not greatly affected by roadway emissions)”.

WESTCONNEX GROUNDWATER DRAWDOWN AND CONTAMINATION NEEDS TO BE ADDRESSED

The government’s own Environmental Protection Agency (EPA) and Department of Primary Industries (DPI) have raised concerns about the original Stage 3 EIS in relation to potential water contamination and the reduction of groundwater reserves during both the construction and operation phases of the project .

The WestConnex M4 - M5 Link Independent Groundwater Review Report points out that the Stage 3  EIS assumed that the long-term average  groundwater inflows into the tunnels can  be limited to less than 1 litre per section kilometre, but it is not clear that this is possible, given that recent tunnelling projects have experienced higher inflows. The increasing levels of inflow into the tunnels lower the levels of groundwater, reducing the quantity of such reserves.

The Department of Primary Industries (DPI) raised specific concerns around tunnel inflow for those underground sections where “the juxtaposition of sandstone and alluvium occurs”, because “there is a high risk of fracture and a high degree of connection to the overlying alluvium … where tunnelling is designed to occur through shallow sandstone”.

The DPI, Inner West Council and UNSW Water Research Laboratory, the independent consultants reviewing the groundwater impact of Stage 3, have all raised concerns about potential saltwater intrusion due to drawdown.  This means that when groundwater levels drop due to the tunnel inflow, a decline in pressure is expected that will cause salt water from tidal areas to migrate into the rocks containing groundwater, making the water more saline and impacting its sensitive uses.

While the Department of Planning have recommended increased monitoring levels and a groundwater management framework, the monitoring will not necessarily be in place for the life of the project. And more monitoring does not mean pollution and contamination is stopped. And it does not equal significant legal and financial consequences for the Sydney Motorway Corporation.

The huge volumes of paperwork and regulations have so far not stopped the project from reaping havoc on the residents of St Peters and Haberfield.

UNSW’s peer reviewers are not satisfied with the current state of play. It requests more clarification:

“WRL’s [UNSW Water Research Laboratory's] reviewer has recommended that more detailed information and diagrams be obtained from the proponent’s groundwater modellers prior to any construction work and prior to the finalisation of the project design and environmental management plans.”

Despite the gaps in information and the poor methodology the NSW Planning and Environment Department have still approved Stage 3. WestConnex is fast becoming examplar par excellence of the abject failure of planning regulations in NSW.

Responding to news of the approval of Stage 3 of WestConnex, Labor’s transport spokesperson Jodi McKay posed the obvious question: “How can you approve something when no-one knows what is being approved?”

“Thousands of submissions were made against this project and yet it is allowed to proceed. The level of disregard for public and good transport planning is shocking. WestConnex fails on all counts, social, environmental, economic and transport, and yet they are continuing this behemoth toll road.”

They were both being too polite. We’ll call it for what it is: a cluster***k of mammoth proportions.