Why WestCONnex "mitigation" is one big con

WESTCONNEX Action Group's Kathryn Calman lives in Beverly Hills, right near the King Georges Interchange that's now being widened for WestCONnex. The complaint she lodged after yet another near-sleepless night of heavy construction shows just why the Baird Government's "mitigation" promises can't be trusted.

Thank you for your time today to attend to the many issues relating to the WestConnex KGR M5 Interchange.

As a summary of last night incidents, where multiple of breaches occurred:

No notice of night works was received by Elouera Street South. In the event such notice was received does not excuse what followed.

At least this time no incident I am aware involved the workers yelling at each other, and this time no yelled expletives (that has occurred on a previous occasion)

The major incident that occurred was a construction blockage on the M5 on-ramp that lasted for approx. 20 minutes. During that time motorists and truckies became more and more frustrated, resulting in initial beeps of various horns, culminating into an orchestra of multiple vehicles blasting their horns for a long duration.  This commenced around 3.20am (or thereabouts) with clearance of that traffic around 3.40am. This disturbed the entire neighbourhood of Beverly Hills, as a significant number of lights were on in houses when I went to inspect. Our home is 200 metres away, yet still woke my entire household. For me, I had not yet got to sleep due to other sleep disturbance incidents.

Here is a list of breaches to approval conditions:

The WestConnex 24 hour complaints line – call was answered but the operator did not know for whom to pass the call to.

At 3.30am, mitigation needed for traffic management was potentially required immediately. Not take a message and deal with it the next morning.

We had no idea if the cause of the beeping was finished, or we had hours left to go.

There seems no recourse for residents when such an incidents occur again. When being the operative word.

Blockages such as the on-ramp to the M5.  It is reasonable to expect that traffic management / signage should have been available on King Georges Rd.

It is reasonable for residents to expect Fulton Hogan to manage motorists frustrations and avoid significant noise incidences.

It is a condition of approval to switch the high pitch down to a squawk, which is more bearable. The high pitch beep gets under one's skin.

This issue has been raised with Fulton Hogan on MANY occasions. Although incidences are lessened, it was only through multiple resident complaints that the construction workers adhere.

Significant instances of trucks idling in front of people’s homes. The worst was in Allambee Cres Sth in early September where a truck idled in front of No 4 for an hour.

Many times in Elouera Street trucks have idled up to 15 minutes, for which is not reasonable for residents to accept high diesel pollutants belching into our homes.

It has been a daily ritual to tell the workers to turn off their trucks. They are much better at it now, but it is only due to multiple complaints.

This occurs multiple times every night, and all through the night.

The light sync means that vehicles queue for a bit of time. Perhaps one in three / four traffic sets at least one vehicle will blast their horn.

Fulton Hogan were requested to put up signage. The signage supplied is inadequate and has not addressed the problem.  Residents near these lights are going nuts.

We require signs in lights alerting drivers to not beep. Can we add ‘Fines will apply’? even though its not legislated?

This is the source of multiple sleep inhibitors – causing the inability to drift to sleep. It not a sleep disturbance in my house, but I am certain residents closer are woken during the night.

The noise walls that were initially for a few weeks, then 14 weeks in the EIS – but temporary noise walls will be installed.

Well – its four months now. And no likelihood for many months to come. And it is not reasonable for residents to accept thin plywood as a ‘temporary noise wall’.

It is unreasonable to state a length of time in the EIS for residents (already highly exposed to traffic noise at and over RNP) to endure even higher noise for now an unknown long length of time.

We have complained numerous times about this. March was the latest month for which the noise walls will be reinstated.

Urban Renewal – Where are the reissued landscape plans?

We are also concerned that the noise walls have shifted closer to residents homes. We will require measurement of this. It appears a generous amount for revegetating is made available on the motorist side (as one of those opportunities to enhance the driving experience) at the expense of a community that have already endured M5 construction – legacy M5 just 15 years ago.

We have also noticed that the piling of earth contains a significant amount of large rocks, thus inhibiting the ability to revegetate.

Oh – but I forgot. WestConnex will not be addressing much in the way of landscape and urban renewal. Frank from AECOMM has advised that it is easier for the maintenance crew to inspect bare noise walls.

Residents were never informed that their street would become a major thoroughfare for heavy vehicles – one roughly every minute.

With incidences of idling and THEN idling due to queuing it is not feasible or reasonable to have residents accept high levels of pollution blowing into their homes and high truck noise.

For most of the initial part of the project, this street, perhaps the most highly impacted due to a compound in place of their lovely park were never letter dropped.

The lack of attention by WestConnex to attend to highly impacted community of Beverly Hills. The hostile environment caused by daily breaches of what I regard as common courtesy to residents undergoing a lot of trauma.

I appreciate your attention to these matters. Sleep disturbance and high impact noise is detrimental to human health.

Please advise me of the mitigation solution to avoid these instances from occurring again. I am keen on law enforcement and fines to drivers. 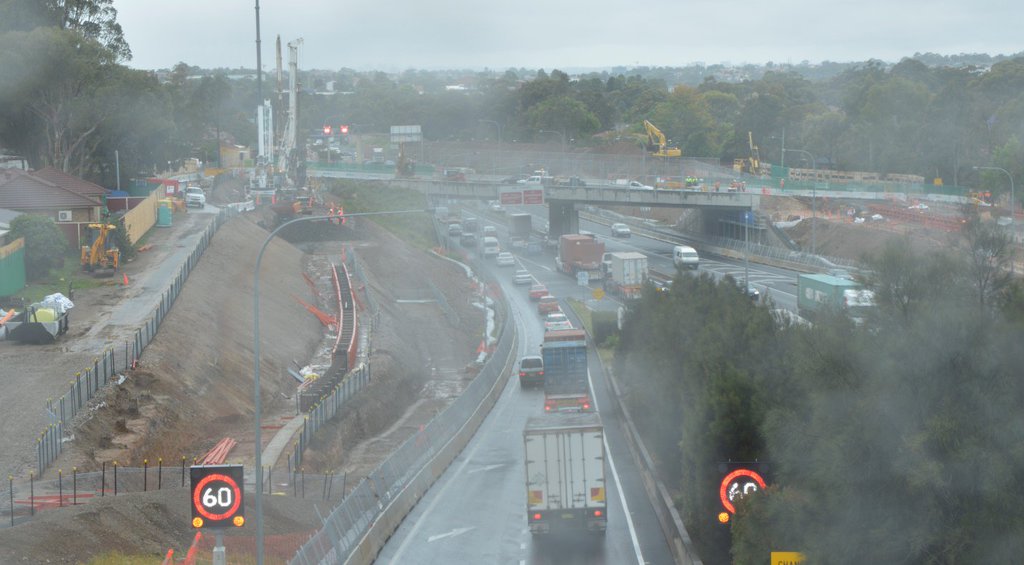