Last month the Department of Planning and Environment approved Stage three of the WestConnex, the M4-M5 link, for which there is still no actual engineering design, only a concept plan. With this approval it released a series of independent peer reviews, which were hardly complimentary of the way in which transport, air quality and groundwater impacts etc. had been assessed in the project’s environmental impact statement (see our previous blog). Despite the criticism the road has still received a green light from the Department ... an incredibly frustrating situation.

The independent review of the air quality assessment commissioned by the Roads and Maritime Services for Stage Three of the WestConnex project, the M4-M5 Link, has criticised the methodology used and the accuracy of pollutant measurements. But it still lent its overall stamp of approval for the assessment.

Pacific Environment themselves carry out work across Australia on multiple government projects, including on former stages of the WestConnex project (WestConnex Delivery Authority 2015). It makes you wonder whether organisations and people so entrenched in an industry can actually ever be independent?

While Todoroski Air Science’s review of the Stage Three air quality assessment is extremely critical of the approach taken and the accuracy of some of the measurements, it still approves of Pacific Environment’s general findings that the M4-M5 tunnel from Haberfield to St Peters will have little impact on air quality overall.

The background air quality refers to the concentration of pollutants in the environment from sources other than WestConnex road traffic. Adding this together with contributions from the motorway traffic gives an indication of how much total pollution an area will be faced with. The air quality review calls out the background measurements for their inaccuracy. With regards to the concentrations of PM10 (particulate matter 10 micrometers or less in diameter) and NOx (oxides of nitrogen) levels it claims:

“These errors are significant in regard to the absolute accuracy of the assessment predictions, but would only matter if there were criteria applicable for compliance or assessment purposes (which there are not). “

Quite a disturbing statement.

“The approach taken does not allow scope to evaluate the possible issue of the Project potentially leading to levels above a criteria or standard in some specific locations.  This is a moot point at present as the EPA criteria and NEPM standards do not apply to road projects. The issue may be relevant should any future road project assessment guideline set out an applicable criterion.”

It’s unclear from Todoroski’s conclusions regarding the background pollutant levels, whether these have been underestimated or not. But his statements certainly raise questions about the overall accuracy of the air quality impact assessment and the EIS more generally. It appears that the data used is not trustworthy.

NO MENTION OF FILTRATION FOR WESTCONNEX TUNNEL STACKS

We raised the problem of the unfiltered ventilation stacks in a previous post about Stage three of the WestConnex project. And the issue has been raised time and time again by communities who will be living in the vicinity of these stacks. 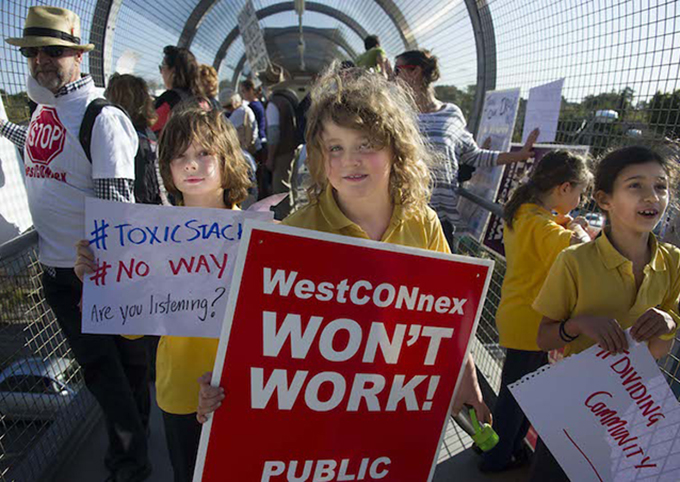 The air quality peer review however does not address this issue.

While the review is critical of the air quality modelling, it repeats the industry consensus that  the emissions from the stacks will have relatively low pollutant levels.  WAG and others campaigning against the expansion of road projects have repeatedly raised the issue that just because the measurable concentration of pollutants from tunnel ventilation stacks does not surpass limits, that does not mean they do not cause any harm (See Dr Paul Torzillo’s comments).

What’s more, ultrafine particulate matter, PM1 or PM0.1, are not measured among the pollutants from the stack outlets. This raises questions about how safe the emissions will actually be. Previous research around the Lane Cove Tunnel has found that residents living in close proximity to tunnel ventilation stacks saw an increase in respiratory symptoms following the tunnel’s opening (Cowie et al. 2012). The scientists who carried out the work claimed that as there were no significant increases in measured pollutant concentrations, the findings were likely due to unmeasured pollutants or smaller size fractions.

Todoroski’s peer review finds that the meteorological modelling used in the EIS to determine the dispersion of pollutants is poor. Basically, the EIS is useless in gauging what areas will be hit with pollution. In its critique of the model used, the review states:

“The outcome is poor spatial and temporal meteorological performance, and by extension, poor capacity for the overall model to predict short term, place and time specific pollution levels at a distance from sources.” (See Todoroski independent review)

And perhaps emphasising just how much public health is disregarded in NSW, the review observes that:

“The issues identified in this review appear to primarily arise due to a lack of a suitable air quality impact assessment approach for major road projects in NSW.”

This hardly inspires confidence in Pacific Environment’s approach or in the assessment of the air quality impacts for any major road project in NSW.

Yet, frustratingly, the peer review still gives Stage Three the green light, “ … because any well designed tunnel would have less impact than an equivalent surface road, and in-tunnel air quality can be managed through appropriate design of the ventilation systems and outlets.”

But such an argument limits the air quality impacts of Stage 3 to the tunnel itself. Traffic does not just stay in tunnels. As Dr Paul Torzillo, a respiratory health specialist and executive clinical director at Sydney’s Royal Prince Alfred Hospital points out:

“When traffic emerges from tunnels, surprisingly, it has to go somewhere. So it goes back on to roads, and when it goes to those roads, then those roads have higher use, higher traffic, higher pollution levels.”

The other problem is that, in general, motorways ultimately end up producing more traffic rather than resolving traffic congestion. As road capacity increases, so does demand (see Chris Standen’s submission for stage 2 of the project).

Even if the M4-M5 tunnel is better than an equivalent surface road, WestConnex and other road projects induce demand overall. Such demand takes years to build up and the air quality assessment does not appear to account for that. 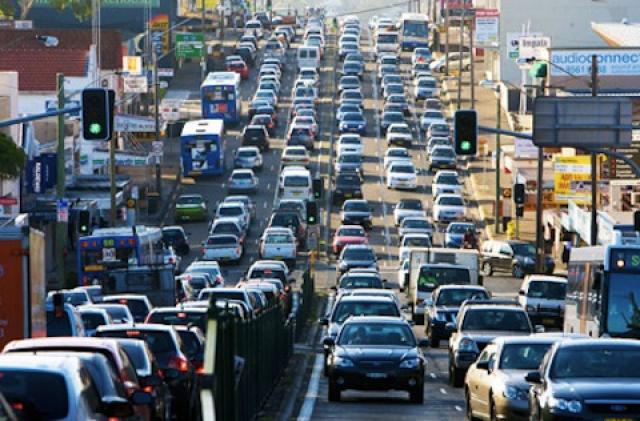 In cases where motorways have been removed, such as the Embarcadero Freeway in San Francisco, Cheonggyecheon in Seoul, Harbor Drive in Portland, and Park East in Milwaukee, traffic congestion has decreased.

Despite all of the problematic assumptions and errors in the air quality assessment and the independent review’s criticism of it,  there is no call for re-evaluation or rejection, and that is disheartening. But then let's be honest, it is just not in the interest of the government-private sector nexus who make money from the project and its associated toothless reviews and consultations to stop it. NSW’s planning system is broken.