Thanks again for all your support, and for everything you're doing to help stop WestCONnex. If you've been following us on Facebook or Twitter, you'll have seen it's been another massive few weeks in the campaign. Here's a quick update as to what's been going on - and how you can get involved.

The Department of Planning has finally published the almost 12,900 submissions it received. But true to form, they've stuffed it up in their rush to rubber-stamp the project.Almost all 180-odd submissions from organisations like ours have been buried in "Anonymous" files, along with hundreds of others - making it virtually impossible for anyone to find them in the 145 PDFs they've been dumped into.If you made a submission, check the list for your name now. If it's missing, call the Department on 02 9228 6351, ask to speak to Mary Garland or Naomi Moss, and demand that your name be put on the list. They need to know it's not OK to dodge transparency like this. Let us know how you go.

After Marrickville Council revoked WestCONnex's permit to drill on council lands in Tempe for the unapproved New M5, the Baird Government decided to forge ahead anyway by claiming powers under the Roads Act. So we took action with residents to delay the start of works, and picket the drill sites on a daily basis.

There'll be more of these actions if the Baird Government insists on ignoring communities and its own planning laws in its rush to get this tollway built. We'd love to have you join us - email us or text 0402 261 364 to hear about future protests.

If the New M5 goes ahead, Arncliffe will become the midpoint tunnelling site and a 24/7 construction zone, as well as the site of yet another unfiltered pollution stack and more tollways. So we've formed a new Arncliffe group, and we're hosting a community forum about WestCONnex next Wednesday at 7pm. Again, we've love for you to join us. Visit our event page for more info and to RSVP.

After being named Newtown Local Woman of the Year for her work campaigning against WestCONnex, our own Pauline Lockie was invited to the official reception at Parliament House. Of course, she couldn't pass up the chance to meet Mike Baird and ask him for a meeting.

And the Premier had his "let them eat cake" moment when he went to Haberfield to open a patisserie, and was confronted by dozens of locals whose homes and communities are being destroyed for WestCONnex. After joking that all they really wanted was ricotta cheesecake, Baird changed his tune when he was forced to speak with residents outside. Our Sharon Laura also asked for a meeting.

Will Pauline and Sharon ever get their meetings? We'll let you know... 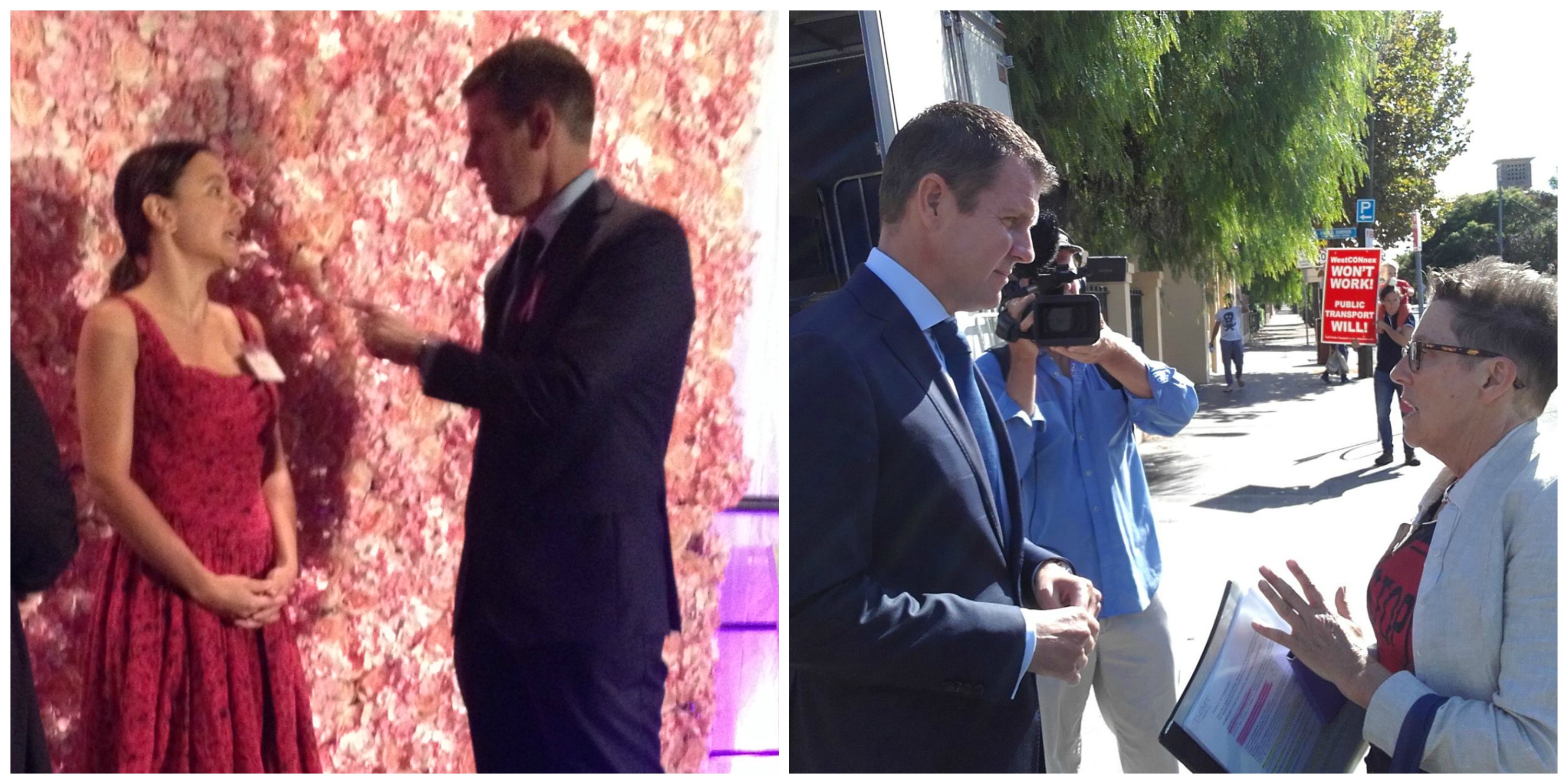 Marrickville Council released the legal advice it received last year in relation to WestCONnex's work at Alexandria Landfill, which suggested what we've always said: that WestCONnex has been doing this work, including removing deadly asbestos, without proper approvals.

We're looking into legal options on this and other aspects of WestCONnex right now. If you can help, please make a donation - any amount will be gratefully received!

We'll be launching the first part of our Federal election campaign next week, so keep an eye out for our next email to see how you can push our pollies to take action.

Thank you again for all your support. Together we can stop WestCONnex!