No arrests were made during the peaceful four-hour protest, which saw contractors employed by Leighton Samsung John Holland Joint Venture forced to pack up and leave after residents of all ages refused to leave the public spaces where they planned to conduct drilling for WestCONnex.

“Residents are sick of WestCONnex contractors coming in, disrupting our public spaces without notice, and carrying out these works to build this toll road before they get approval to start construction,” said WestCONnex Action Group spokesperson Sharon Laura, who took part in the protest.

“This is not the first time we’ve stopped WestCONnex works going ahead, and their contractors have never been able to provide us with any authority that proves they’ve got the legal right to carry out these works.

“It’s yet another example of the utterly corrupted processes Premier Baird and his government are using to try and rush this $16.8 billion sham toll road through.

“But we are not going to stand aside while the Baird Government destroys our neighbourhoods for WestCONnex – a toll road that will do nothing except send drivers from western Sydney straight into an inner-city traffic jam.

“It’s not good enough. It’s time for Premier Baird to recognise this, stop the disastrous WestCONnex toll road, and invest its $16.8 billion cost in projects that would actually solve Sydney’s transport problems.”

The protest followed a similar action in Algie Park in Haberfield this morning, where WestCONnex surveyors quickly packed up and left after Ms Laura started questioning them about their authority to conduct the work.

The Department of Planning and Environment received nearly 5,000 submissions in response to the M4 East’s environment impact statement (EIS), of which less than 10 were in favour of the project. Despite this, contracts have already been signed with Leighton Samsung John Holland Joint Venture, and construction works have been taking place for months. 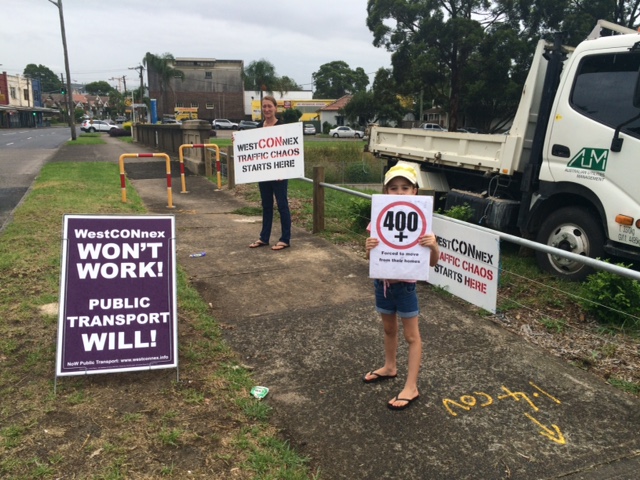