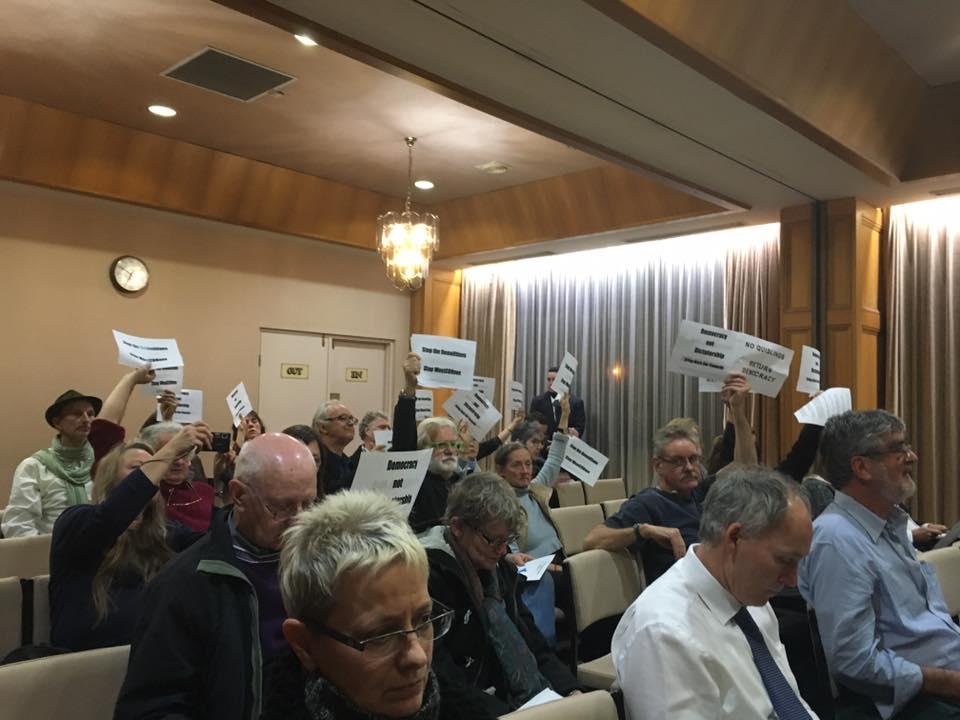 On 28 July we attended the first meeting of the IWC WestCONnex Community Liaison Forum. Pearson agreed to set up the Forum and hold monthly meetings with community, as a result of community pressure on IWC to take action on WestCONnex.

The forum was attended by Richard Pearson, two senior Council officers, a newly appointed Dept of Planning Compliance Officer and representatives of community action groups along the WestCONnex route.

Those present (individuals and representatives of groups like ours) were asked to agree to a proposed terms of reference - which was unusual in itself.

Disappointingly it became clear from the proposed terms of reference - as well as reports on IWC’s representations to the Baird government and actions taken by IWC so far - that Pearson and IWC are focussing on damage control and compliance, and are not proactively opposing WestCONnex. This is notwithstanding the motion passed by Pearson at the 5 June IWC meeting that “IWC formally adopts a position of continued opposition in the strongest terms to the WestConnex project”. It therefore continues to be vital that we let IWC know that the community wants WestCONnex STOPPED.

The meeting strongly demanded that IWC take a more proactive stance in opposing WestCONnex, and an oppositional/challenging approach to any Council requests denied by WestCONnex and Government agencies. We, along with other groups, also refused to endorse the terms of reference.

Council action to ensure Government and WestCONnex agencies’ comply with legal and approval  requirements was also underwhelming, having only arranged for an internal Dept of Planning Compliance Officer for WestCONnex, to be seconded to IWC. Rob Sherry is responsible for compliance for all WestCONnex works in the Council boundary, IWC first point of call for compliance concerns and can be called down to site if there is a question of whether street works are authorized and carried out as required. He is also monitoring WestCONnex 1800 “help” line weekly to ensure complaints properly dealt with.

At the 5 June IWC meeting Pearson confirmed that legal advice was being sought on whether an injunction could be obtained. At the Forum Pearson advised that this was the legal opinion originally requested by Ashfield Council and related to the M4 extension (Stage 1) and the Haberfield demolitions only. The legal opinion sought has now been extended to cover the M5 extension (Stage 2) and the St Peters – Rozelle tunnel (Stage 3). We requested Council to liaise with Sydney City Council who is also seeking similar advice, and that Council review the State Government approval conditions for the M5 extension to ensure that all those involving Council are being complied with.

Council has also agreed to set up a dedicated WestCONnex web page with information on proposed works, approval requests, documents received about WestCONnex and IWC contact lines for help and questions.

Minutes of the meeting are to be made available by Council. WAG will attend future meetings and continue to press Council for action and information. We’ll  update on developments. The next Forum meeting will be held on 25 August.

Update 9 August: We've since received the draft minutes from the meeting, which included the following:

"Item 1 Draft Terms of Reference - There was discussion regarding whether the WCLF should focus only on opposition to WestConnex or also on what improvements or mitigation might be sought to improve the outcomes for residents. Views were mixed, however the Administrator indicated that in his view the Forum needed to provide Council with construction and rollout issues of major concern in order that these could be taken up with the State Government. The Administrator determined that WCLF members be invited to forward comments on the Draft Terms of Reference for WestConnex Community Liaison Forum to Council by COB on Friday 12 August 2016."

This further reinforces our view that the IWC is not focused on actively opposing WestCONnex.