Members of WestCONnex Action Group (WAG) went to the WestCONnex community information session in St Peters on 7 December 2016. Here's what we found out.

This “community information session” turned out to be an exhibition in a demountable with lots of maps and pictures of dump trucks and borers, WestCONnex posters spruiking jobs, environmental credentials, and brochures galore. There were lots of project reps present. Most came from the private firms contracted to build the WestCOnnex New M5, which includes firms owned by CIMIC (Leightons) and Samsung, both companies embroiled in major corruption scandals.

True to WestCONnex’s form when it comes to limited and inaccessible community consultation, the demountable is situated at the Burrows Rd construction site in St Peters - an inconvenient location even for residents who live in St Peters, let alone those between St Peters and Arncliffe, who were also expected to attend this session.

The session hours of 4pm to 7pm also seem designed to make sure as few working people and families can get there as possible. This was the first of only two sessions; the next one is tonight, Tuesday 13 December, with no sessions planned for weekends.

Welcome to the concrete starfish monster

While detailed maps of various New M5 construction sites were on display, there was a major focus on the St Peters Interchange, with plans of the proposed Campbell Rd/St works, a scale model of the interchange, and CGI video showing the “driver’s experience”.

Official WestCONnex video. The section shown at the session starts around 1:00.

The scale model of the St Peters Interchange showed just how huge this concrete starfish monster and its drastically widened feeder roads really is, and how much it will dwarf the surrounding area. The planned flyovers are up to 7 storeys high, and the interchange itself would be bigger than the whole of Sydney Park, totally changing the feel and character of the area. 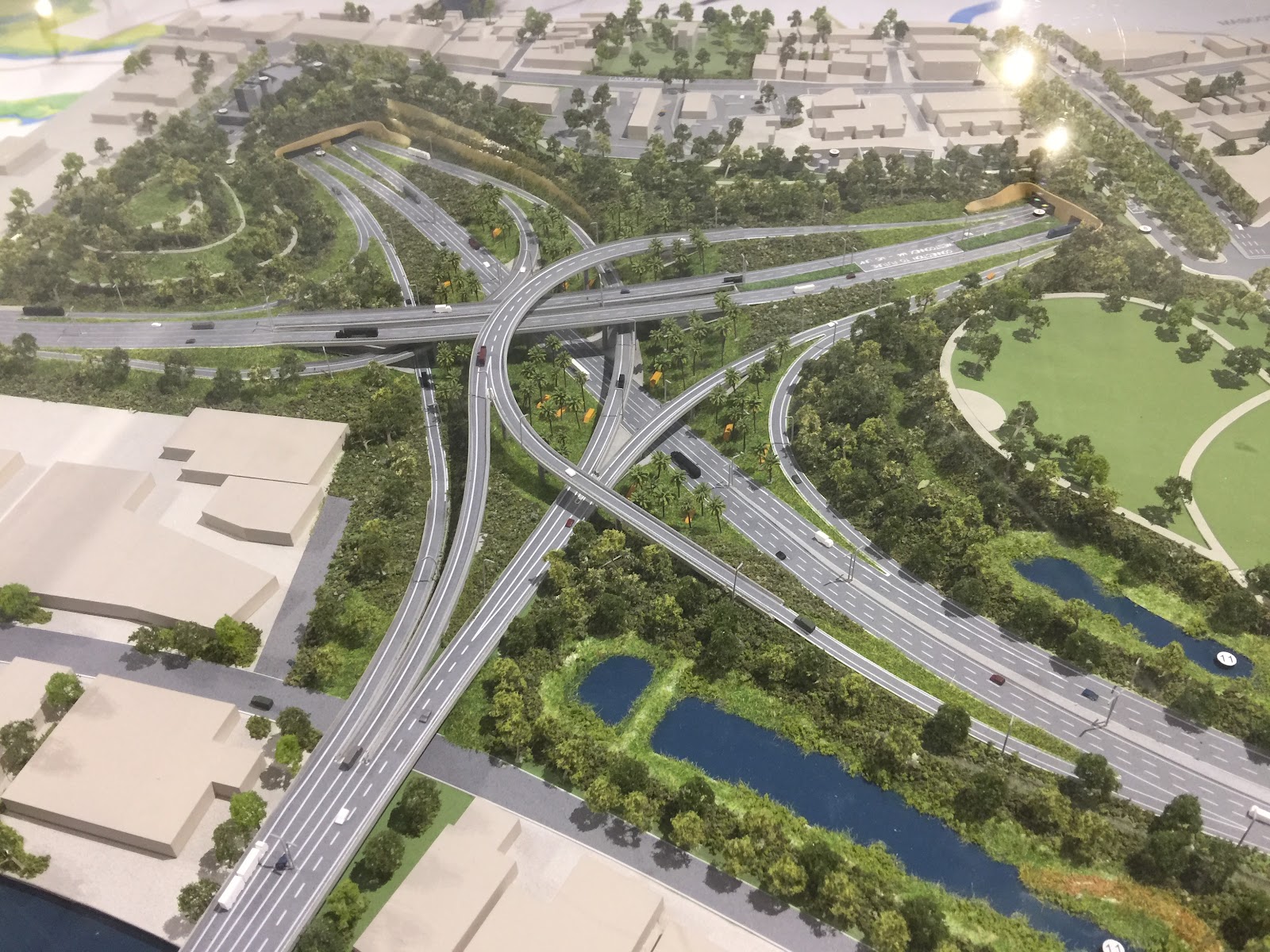 In the top left corner of the image above, you can see the exit / entry portal for the WestCONnex New M5 tunnels under the intersection of Princes Highway and Canal Road.

In the top right, you can see the tunnel spur, which is designed to connect the St Peters Interchange to the Stage 3 tunnel to Rozelle - the WestCONnex M4-M5 Link. This is located roughly where a row of terraces now lie at the top of Campbell Rd. Bottom left is the Euston Rd exit, while the large highway to the bottom right shows the exit onto Gardeners Rd.

Despite Premier Baird himself insisting to us that all the new “green space” at the interchange is a major selling point, staff at the session admitted the areas under the flyovers and beside the roads wouldn’t be accessible to the public because this would be unsafe.

The only accessible green spaces are likely to be the larger patches alongside the major roads, next to the unfiltered pollution stacks and expected heavy traffic. We also found out the Campbell Rd “park” isn’t even part of the Stage 2 / New M5 project, and won’t be done until the Stage 3 / M4-M5 Link tunnel works are completed. This isn’t due to happen until at least 2023.

We know from the experience of residents in Beverly Hills that there’s a vast difference between what WestCONnex’s models, videos and artist’s impressions promise, and what's actually delivered. So it remains to be seen how much of this "park" ever materialises.

But this session was about the Sydney Motorway Corporation (SMC) selling the St Peters Interchange to residents. So it's a best-case fantasy, with pictures and models containing huge trees, and almost no cars or trucks to be seen. In practice, this would be a barren motorway interchange with tiny trees for at least 10 years - and in all likelihood far longer, given how long it took for trees in Sydney Park, another former tip, to flourish. 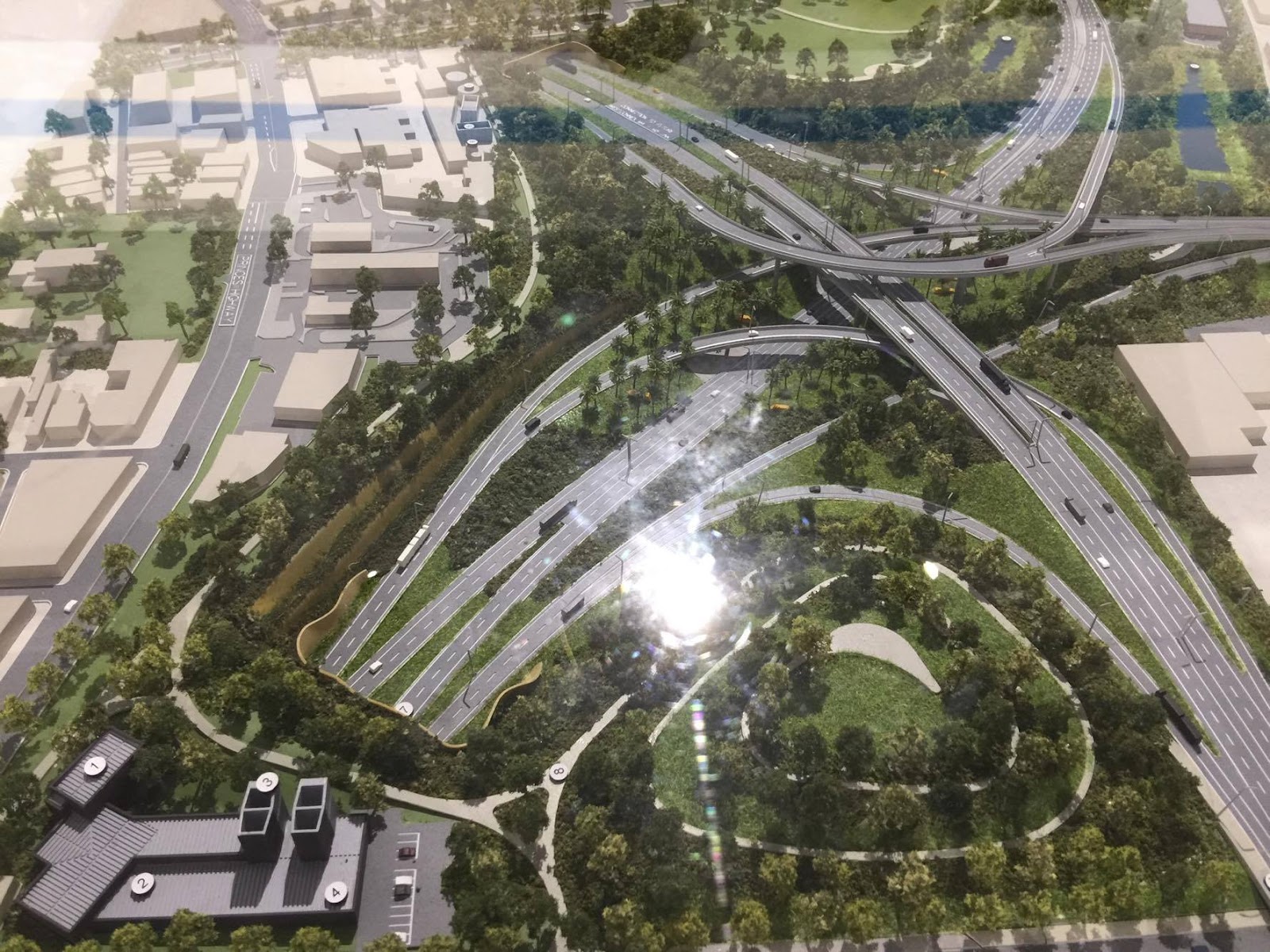 St Peters Interchange scale model. The main parts of the "park" can be seen at the top and bottom of the image.

The scale model also confirmed that there are to be at least one large stack on top of what SMC call the “ventilation centre”, behind the former Dynamo Garage at corner of Princes Highway and Canal Rd (labelled "3" in the photo below).

According to the RMS air quality expert at the session, this stack is to be 20 meters high. Large enough to be obtrusive - but is it high enough to make sure toxic particles are sent “high into the atmosphere” as promised by the SMC in response to serious concerns about Baird government’s refusal to filter these stacks?

This is only the start when it comes to unfiltered pollution stacks at the St Peters Interchange. Staff confirmed more stacks would be required for the Stage 3 / M4-M5 Link tunnel, the Southern Connector, and possibly the Sydney Gateway. This would see further stacks places near the intersections of Campbell Rd and Princes Highway, and Canal and Burrows Roads towards Green Square. 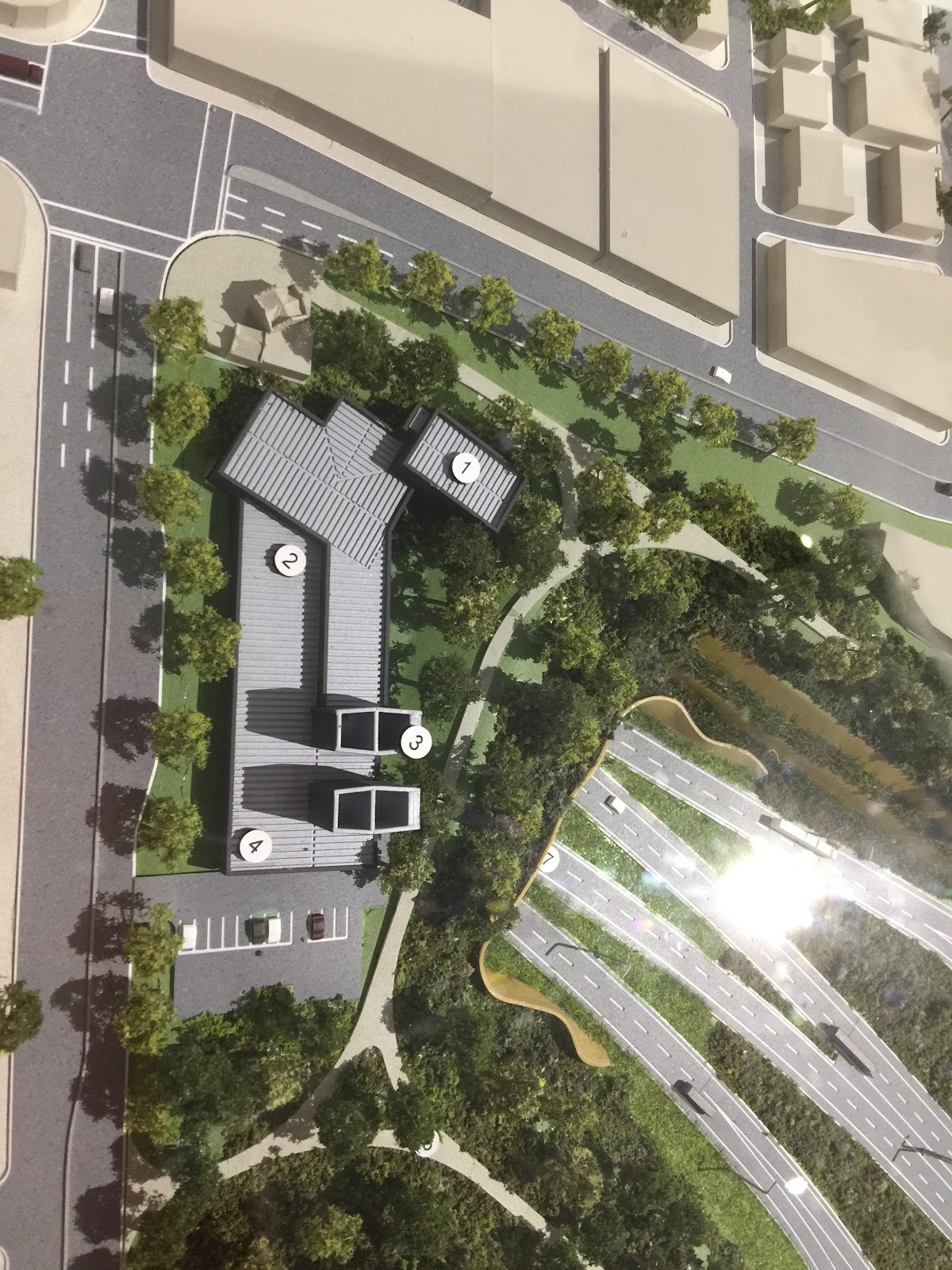 Still no answers on traffic

Despite the sessions being promoted as an opportunity to ask questions about “upcoming traffic changes”, no one was able to answer local traffic implications and traffic modelling questions. We were consistently told by project representatives that this was outside the scope of the Stage 2 team.

However, all admitted that the removal of the Camperdown portal from the M4-M5 Link tunnel would increase traffic exiting at St Peters, and made reference to the King St Gateway Project and the Alexandria Road Widening Project, but had no information as to those, being RMS projects. An SMC representative told us that revised traffic modelling was being produced by RMS for the Stage 3 EIS, including for St Peters Interchange, even as she insisted that Stage 2 / New M5 was an approved project and referring to the Stage 2 EIS traffic numbers.

Join us to demand answers tonight

We encourage you to go along to tonight’s “information session” on Tuesday 13 December to see the proposed concrete starfish monster for yourself. If you can’t make it, why not complain to WestCONnex about the limited days and unworkable opening hours? Email them at [email protected] and [email protected].