Selling off WestCONnex: What does it mean?

WestCONnex was meant to be funded using a combination of taxpayer dollars, tolls, and the sale of the roads' toll concessions. But the Berejiklian government has just announced its intention to sell off the company tasked with building it - the Sydney Motorway Corporation (SMC). This was first announced as the sale of a 51% stake in the SMC, but it's now been confirmed that the government is considering selling off the SMC in its entirety. So what does this mean for the people of NSW - and the future of WestCONnex? Commercial lawyer and WestCONnex Action Group (WAG) spokesperson Rhea Liebmann explains.

The funding model used for the business case was in essence that the NSW government and a small amount of bank loans would start the projects off, and that as each stage was completed, the toll concession to that stage would be sold off to pay for the construction of the next stage. 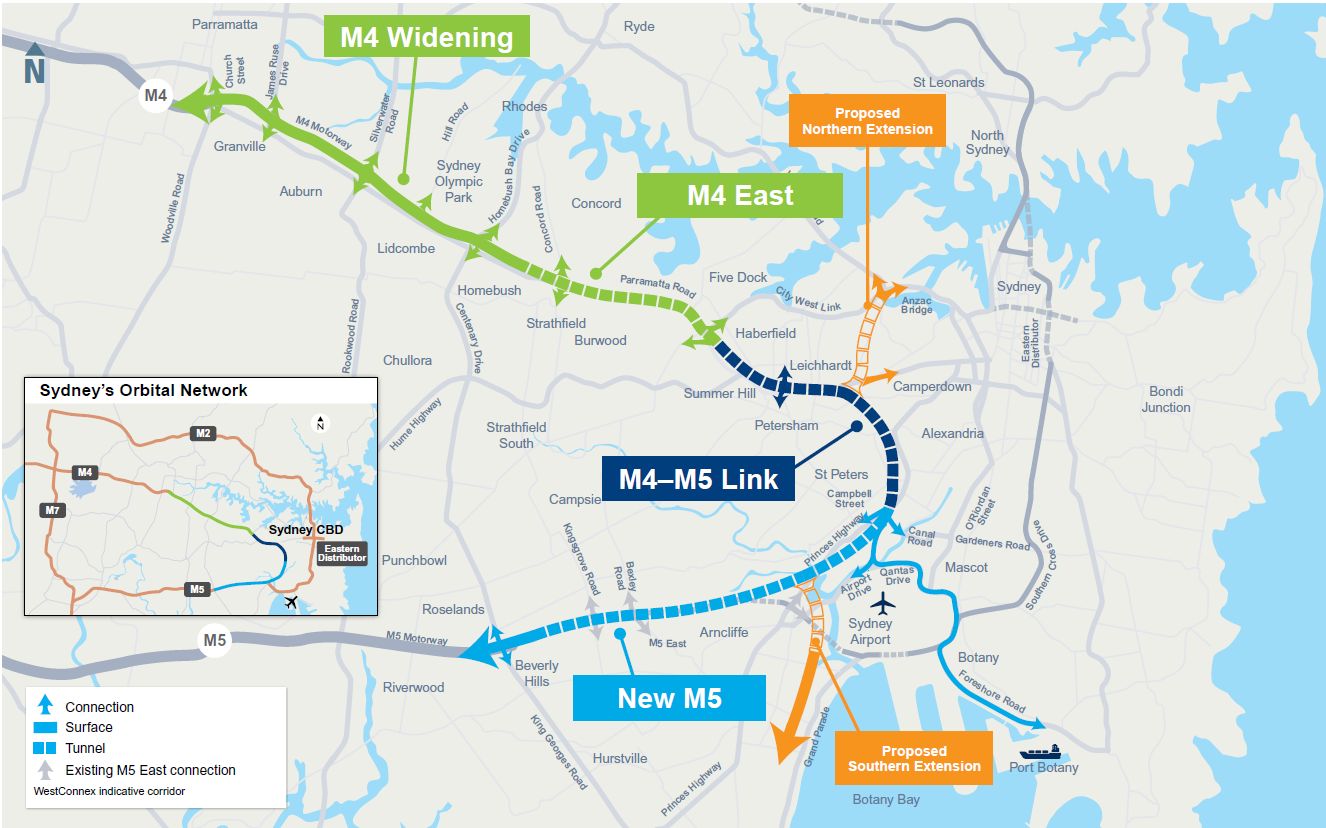 Map of WestCONnex and its proposed extensions

The timetable and start of construction of the New M5 was brought forward by the $3.5bn Federal grant and concessional loan.

The toll concessions are basically priced by purchasers as:

The aim, of course, would be for the toll revenue to include a healthy profit return on funds invested.

The main risk taken by the purchaser when deciding how much to pay for the concession is whether the traffic projections their revenue calculations are based on are overstated. This is what happened with Cross City Tunnel and the Lane Cove Tunnel, and why companies like Transurban negotiate minimum traffic guarantees. In the case of WestCONnex, this would likely mean that government has to pay a penalty to the buyer if its traffic projections are overstated.

"Nothing is left, not even the Laminex": On Transurban's fearsome negotiating skills. Source

The sale of SMC is a different proposition. This involves the sale of part or all of the shares in SMC - so the company itself, not just the toll concessions.

SMC was set up to construct and finance all three stages of WestCONnex. SMC has entered into all the main construction contracts for Stages 1 and 2, and consultancy/advisory contracts for all stages. There already have been and will continue to be cost overrun claims under those contracts, particularly as each stage nears completion, when budgets run tighter.

During his appearance at the NSW Inquiry into Road Tolling on 22 May 2017, Dennis Cliche, the CEO of SMC, said "half a dozen" penalty claims had been lodged against SMC by its contractors, and that this was a normal part of large construction contracts. Though Cliche did not confirm the value of these claims, this means SMC will have potential liabilities under those contracts.

Dennis Cliche confirms penalty claims have been made against SMC. Source

SMC also employs lots of people, so has payroll and super liabilities, and will have tax and bank loan liabilities.

Any purchaser of SMC takes on these liabilities, as well as responsibility for/risk of constructing the motorways, cost overruns, and so on. This changes the price/value the NSW government can get for WestCONnex.

The proposed timing of the sale in mid-2018 also means the buyer is taking on more risks of construction costs and delays, as well as the risk on traffic projections. This risk is increased because neither Stages 1 nor 2 will have been completed by the time of the sale, and Stage 3 may not even have been started.

Plus, instead of getting an immediate return from tolls under each concession agreement, the return is delayed until each stage is completed. Therefore the purchaser will be willing to pay less.

It also means that a buyer like Transurban is likely to extract additional guarantees from the government in addition to traffic projections, such as guaranteeing any additional liabilities or cost overruns.

“In addition to Sydney Motorway Corporation’s residual seed capital, the NSW Government, subject to final approval, will also inject up to an additional $1 billion of equity into the Stage 2 entities to maintain full ownership at the commencement of construction. Maintaining full ownership during construction is expected to maximise the return to the State on eventual sale.”

The government first said it wanted to sell 51% of SMC. With a majority share, the buyer will control the company and will, in theory, be able to change construction contracts, enter into contracts with related companies, pay out executives and put their own people in senior positions, and so forth, subject to WestCONnex's various planning approval conditions and any promises the government gets in the sale contract.

There is also a very real risk that the buyer will try to save costs on the parks, landscaping and other public amenities promised to the community, as these are these are the last to be done and don't earn revenue. As a non-government private corporation, it's also likely that claims from home owners for any damage caused by the construction of the motorways will be disputed.

However, with a minority stake, the government can at least retain some influence, power and control, have seats on the Board, be entitled to see accounts, etc. But if the government sells 100% of SMC, they will relinquish all control for the construction and completion of all the motorways to the buyer/s, subject to what government can negotiate in the sale contracts.

Under the sales process, it is likely that the government will invite tenders or expressions of interest from potential purchasers. Once vetted, the potential purchasers will be provided with a huge amount of information - way more than the public will ever get to see - under confidentiality agreements, so they can perform  due diligence and come up with a bid price. This is likely to include an updated business case and traffic projections that include Stage 3.